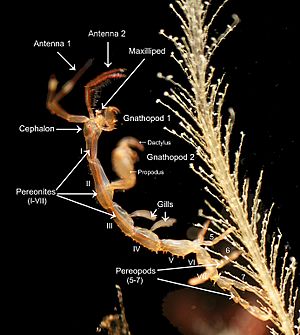 Morphology of a male Caprella mutica

Morphology is the study of animal or human form or body shape. It is the branch of biology dealing with the study of the form of organisms and their specific structural features.

The concept of morphology was developed by Johann Wolfgang von Goethe (1790) and independently by the German anatomist and physiologist Karl Friedrich Burdach (1800).

In English-speaking countries, the term "molecular morphology" has been used for some time for describing the structure of compound molecules, such as polymers and RNA. The term "gross morphology" refers to the collective structures or an organism as a whole as a general description of the form and structure of an organism, taking into account all of its structures without specifying an individual structure.

All content from Kiddle encyclopedia articles (including the article images and facts) can be freely used under Attribution-ShareAlike license, unless stated otherwise. Cite this article:
Morphology (biology) Facts for Kids. Kiddle Encyclopedia.