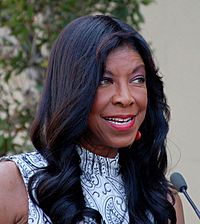 Stephanie Natalie Marie Cole (February 6, 1950 – December 31, 2015), better known as simply Natalie Cole, was an American singer-songwriter. She was a daughter of Nat King Cole and Maria Cole and the niece of Freddy Cole. She became successful during the mid to late 1970s as an R&B musician. After a period of low musical sales due to heavy drug addiction, she reemerged as a pop artist in 1987. During the 1990s, Cole won multiple Grammy Awards. She also appeared in many TV programs.

Cole died in Los Angeles, California on December 31, 2015 from congestive heart failure caused by heart disease. She was 65.

All content from Kiddle encyclopedia articles (including the article images and facts) can be freely used under Attribution-ShareAlike license, unless stated otherwise. Cite this article:
Natalie Cole Facts for Kids. Kiddle Encyclopedia.