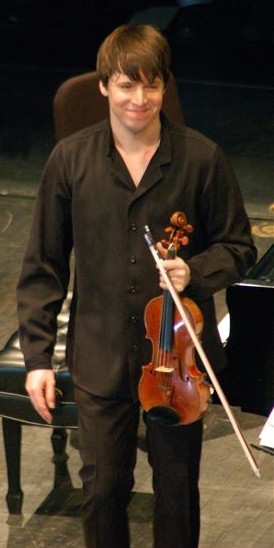 Joshua David Bell (born 9 December 1967) is an American violinist. He is considered one of the greatest violinists of today.

Bell was born in Bloomington, Indiana, United States. His father was a psychologist and therapist. He began violin lessons at the age of four after his mother found that her son had taken rubber bands from around the house and stretched them across the handles of his dresser drawer to pluck out music he had heard her play on the piano. His parents got him a very small violin and started giving him lessons. He learned the violin very quickly, but also had time to enjoy things such as video games and sports.

Bell's first violin teacher suggested that he should learn with Josef Gingold. Bell says that Gingold was a great teacher. At the age of fourteen, Bell appeared as a soloist with the Philadelphia Orchestra conducted by Riccardo Muti. He studied the violin at the Indiana University's Jacobs School of Music, while managing to graduate from Bloomington High School North in 1984.

Joshua Bell first played in the Carnegie Hall, New York in 1985 with the Saint Louis Symphony Orchestra. He has since performed with almost all of the world's major orchestras and conductors. He has played all the well known concertos as well as new works. In 1993 he gave the first performance of Nicholas Maw's violin concerto which was dedicated to him. The recording of this work won Bell a Grammy award. He performed the solo part on John Corigliano's Oscar-winning soundtrack for the movie The Red Violin and was also featured in Ladies in Lavender. Bell also made an appearance in the movie Music of the Heart, a story about the power of music, with other famous violinists.

Bell's violin is a 300-year-old Stradivarius violin called the Gibson ex Huberman, which was made in 1713, a time when Stradivarius was making his best instruments. This violin had been stolen twice from the previous owner, Bronislaw Huberman; the last time the thief confessed as he was dying to having stolen it. Bell had held and played the violin, and its owner at the time jokingly told Bell the violin could be his for four million dollars. Shortly afterwards, by chance, Bell came across the violin again and discovered it was about to be sold to a wealthy German to become part of a collection. According to the Joshua Bell website Bell "was practically in tears." Bell then sold the Stradivarius violin that he had at the time for a little more than two million dollars and bought the Gibson ex Huberman for a little under the four million dollar asking price. His first recording made with the Gibson ex Huberman was Romance of the Violin. It sold more than 5,000,000 copies and remained at the top of classical music charts for 54 weeks. In September 2006 he made a CD called the Voice of the Violin and was released in September 2006. It has songs arranged for the violin. He played the song Vocalise by Rachmaninoff in the Royal Albert Hall at the Last Night of the Proms in 2007. He is a visiting professor at the Royal Academy of Music in London.

In an unusual experiment the Washington Post asked Bell to stand in the street and busk (play his violin) by the entrance to a Washington Metro station one cold morning in January 2007. During the 45 minutes that he played more than 1000 people passed him but only a few people stopped to listen, most of whom were children. Only one person recognized him and one other person realized he was a great violinist.

Bell lives in Manhattan. He is keen on sports such as golf and tennis. He has three children born by a former girlfriend, however married another woman on 5th October 2019.

All content from Kiddle encyclopedia articles (including the article images and facts) can be freely used under Attribution-ShareAlike license, unless stated otherwise. Cite this article:
Joshua Bell Facts for Kids. Kiddle Encyclopedia.