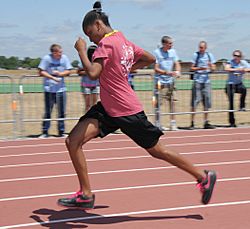 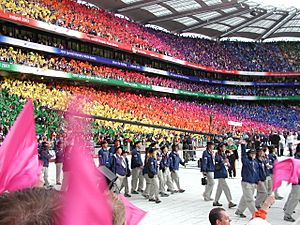 Special Olympics is the world's largest sports organization for children and adults with intellectual disabilities and physical disabilities, providing year-round training and activities to 5 million participants and Unified Sports partners in 172 countries. Special Olympics competitions are held every day, all around the world—including local, national and regional competitions, adding up to more than 100,000 events a year. Like the International Paralympic Committee, the Special Olympics organization is recognized by the International Olympic Committee; however, unlike the Paralympic Games, Special Olympics World Games are not held in the same year or in conjunction with the Olympic Games.

All content from Kiddle encyclopedia articles (including the article images and facts) can be freely used under Attribution-ShareAlike license, unless stated otherwise. Cite this article:
Special Olympics Facts for Kids. Kiddle Encyclopedia.