Chapel Hill, Durham, and Raleigh make up the three corners of the Research Triangle, so named in 1959 with the creation of Research Triangle Park, a research park between Durham and Raleigh. Chapel Hill is one of the central cities of the Durham-Chapel Hill MSA, which in turn is part of the Raleigh-Durham-Cary Combined Statistical Area, with a population of 1,998,808.

The area was the home place of early settler William Barbee of Middlesex County, Virginia, whose 1753 grant of 585 acres from the Earl of Granville was the first of two land grants in what is now the Chapel Hill-Durham area. Though William Barbee died shortly after establishing himself and his family in North Carolina, one of his eight children, Christopher Barbee, became an important contributor to his father's adopted community and to the fledgling University of North Carolina. 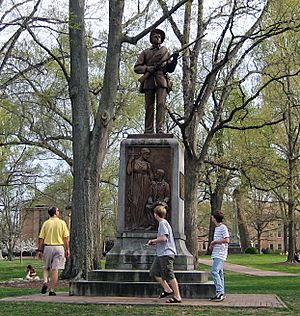 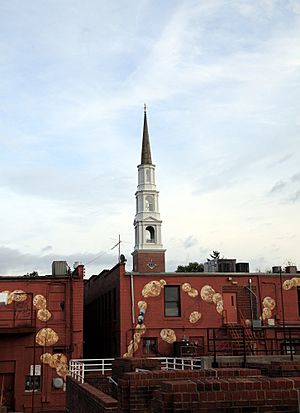 A mural at Amber Alley between Franklin and Rosemary Street

Chapel Hill sits atop a hill which was originally occupied by a small Anglican "chapel of ease", built in 1752, known as New Hope Chapel. The Carolina Inn now occupies the site of the original chapel. In 1819, the town was founded to serve the University of North Carolina and grew up around it. The town was chartered in 1851, and its main street, Franklin Street, was named in memory of Benjamin Franklin.

In 1968, only a year after its schools became fully integrated, Chapel Hill became the first predominantly white municipality in the South to elect an African American mayor, Howard Lee. Lee served from 1969 until 1975 and, among other things, helped establish Chapel Hill Transit, the town's bus system. Some 30 years later, in 2002, legislation was passed to make the local buses free of fares to all riders, leading to a large increase in ridership; the buses are financed through Chapel Hill and Carrboro city taxes, federal grants, and UNC student fees. Several hybrid and articulated buses have been added recently. All buses carry GPS transmitters to report their location in real time to a tracking web site. Buses can transport bicycles and have wheelchair lifts.

In 1993, the town celebrated its bicentennial, which resulted in the establishment of the Chapel Hill Museum. This cultural community resource "exhibiting the character and characters of Chapel Hill, North Carolina" includes among its permanent exhibits Alexander Julian, History of the Chapel Hill Fire Department, Chapel Hill's 1914 Fire Truck, The James Taylor Story, Farmer/James Pottery, and The Paul Green Legacy.

Chapel Hill is located in the southeast corner of Orange County. It is bounded on the west by the town of Carrboro and on the northeast by the city of Durham. However, most of Chapel Hill's borders are adjacent to unincorporated portions of Orange and Durham Counties rather than shared with another municipality. According to the United States Census Bureau, the town has a total area of 21.3 square miles (55.1 km2), of which 21.1 square miles (54.7 km2) is land and 0.15 square miles (0.4 km2) is covered by water. 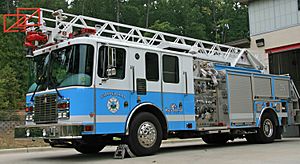 Even the fire trucks in Chapel Hill show support for UNC.

Though Chapel Hill is a principal city of a large metropolitan area, it retains a relatively small-town feel. Combined with its close neighbor, the Chapel Hill-Carrboro area has roughly 85,000 residents. Many large murals can be seen painted on the buildings. Most of these murals were painted by UNC alumnus Michael Brown. Also, for more than 30 years Chapel Hill has sponsored the annual street fair, Festifall, in October. The fair offer booths to artists, craftsmakers, nonprofits, and food vendors. Performance space is also available for musicians, martial artists, and other groups. The fair is attended by tens of thousands each year. 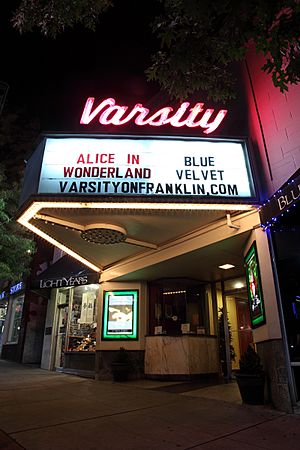 The Sorrell building on Franklin Street has housed a movie theater (currently called The Varsity Theatre) since its construction in 1927.

A variety of corporations are headquartered in Chapel Hill. Health insurance provider Blue Cross and Blue Shield of North Carolina was one of the town's 10 largest employers. Technology companies USAT Corp and Realtime Ops have made Chapel Hill their headquarters location. Journalistic, Inc., the publisher of the nationally acclaimed magazines Fine Books & Collections, QSR, and FSR recently relocated from Durham to Chapel Hill. New companies are selecting the town as their base of operations such as the service company Alpha Install.

The Morehead Planetarium was the first planetarium built on a U.S. college campus. When it opened in 1949, it was one of six planetariums in the nation and has remained an important town landmark. During the Mercury, Gemini, and Apollo programs, astronauts were trained there. One of the town's hallmark features is the giant sundial, located in the rose gardens in front of the planetarium on Franklin Street.

Influences of the university are seen throughout the town, even in the fire departments. Each fire station in Chapel Hill has a fire engine (numbers 31, 32, 33, 34, and 35) that is Carolina blue. These engines are also decorated with different UNC decals, including a firefighter Rameses.

Chapel Hill also has some new urbanist village communities, such as Meadowmont Village and Southern Village. Meadowmont and Southern Village both have shopping centers, green space where concerts and movies take place, community pools, and schools. Also, a traditional-style mall with a mix of national and local retailers is located at University Place.

In 2009, Chapel Hill ranked no. 3 on Newsmax magazine's list of the "Top 25 Most Uniquely American Cities and Towns", a piece written by current CBS News travel editor Peter Greenberg. According to the magazine, Greenberg based the rankings on a variety of features, such as quality of schools and proximity to medical care, as well as culture, hospitality, and scenic beauty.

Chapel Hill also has a vibrant music scene. Classical composers on the faculty of UNC Chapel Hill include Allen Anderson, Stefan Litwin, and Lee Weisert. In the realm of popular music, Alternative States, Remington Brown, Archers of Loaf, Squirrel Nut Zippers, James Taylor, George Hamilton IV, Southern Culture on the Skids, Superchunk, Polvo, Ben Folds Five, and more recently Porter Robinson, are among the most notable musical artists and acts whose careers began in Chapel Hill. The town has also been a center for the modern revival of old-time music with such bands as the Ayr Mountaineers, Hollow Rock String band, the Tug Creek Ramblers, Two Dollar Pistols, the Fuzzy Mountain String band, Big Fat Gap and the Red Clay Ramblers. Chapel Hill was also the founding home of now Durham-based Merge Records. Bruce Springsteen has made a point to visit the town on four occasions. His most recent appearance was on September 15, 2003, at Kenan Memorial Stadium with the E Street Band. U2 also performed at Kenan on the first American date of their 1983 War Tour, where Bono famously climbed up to the top of the stage, during pouring rain and lightning, holding up a white flag for peace. The 2011 John Craigie song, "Chapel Hill", is about the singer's first visit there. One song from Dirty, a Sonic Youth album, is named after the town.

The University of North Carolina has been very successful at college basketball and women's soccer, and a passion for these sports has been a distinctive feature of the town's culture, fueled by the rivalry among North Carolina's four ACC teams: the North Carolina Tar Heels, the Duke Blue Devils, the NC State Wolfpack, and the Wake Forest Demon Deacons.

Many walking/biking trails are in Chapel Hill NC. Some of these include Battle Branch Trail and Bolin Creek Trail.

All content from Kiddle encyclopedia articles (including the article images and facts) can be freely used under Attribution-ShareAlike license, unless stated otherwise. Cite this article:
Chapel Hill, North Carolina Facts for Kids. Kiddle Encyclopedia.