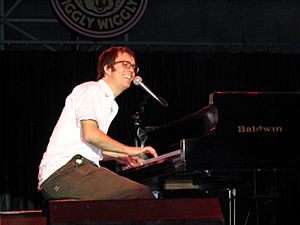 Benjamin Scott Folds (born September 12, 1966) is an American singer and songwriter who plays the piano. He was the main singer of the band Ben Folds Five. The band stopped playing together in 2000, and Folds has played as a solo act since then. His solo albums include Rockin' the Suburbs, Songs for Silverman and Way to Normal.

All content from Kiddle encyclopedia articles (including the article images and facts) can be freely used under Attribution-ShareAlike license, unless stated otherwise. Cite this article:
Ben Folds Facts for Kids. Kiddle Encyclopedia.