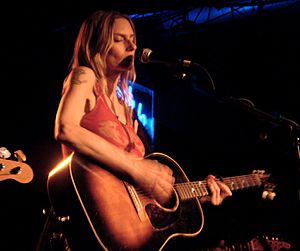 Aimee Mann (September 8 1960, Richmond, Virginia) is an American singer-songwriter. She has teamed up with many pop rock bands. She is known for singing with the group 'Til Tuesday in the 1980s, with many hit songs.

All content from Kiddle encyclopedia articles (including the article images and facts) can be freely used under Attribution-ShareAlike license, unless stated otherwise. Cite this article:
Aimee Mann Facts for Kids. Kiddle Encyclopedia.