For much of the mid-1990s, he lived in Los Angeles, making appearances in television series Providence, The Division, What About Brian, and Related. In 2000, he made his feature film debut in the space adventure film Space Cowboys. The next year, he had a minor role in the independent comedy Kissing Jessica Stein (2001).

He gained wide recognition when Mad Men began in July 2007. His performance earned him the Golden Globe Award for Best Actor in a Television Series – Drama in 2008 and again in 2016, and the Primetime Emmy Award for Outstanding Lead Actor in a Drama Series in 2015. He also directed two episodes of the show.

In 2008, Hamm appeared in a remake of the science fiction film The Day the Earth Stood Still. His first leading film role was in the 2010 independent thriller Stolen. He also had supporting roles in the films The Town (2010), Sucker Punch (2011), and Bridesmaids (2011). Hamm has received 16 Primetime Emmy Award nominations for his performances in Mad Men, 30 Rock (2006–2013), and Unbreakable Kimmy Schmidt (2015–present).

His other television credits include featuring in the Sky Arts series A Young Doctor's Notebook and guest roles in Black Mirror, Parks and Recreation and Wet Hot American Summer: First Day of Camp. He has also provided his voice to the animated films Shrek Forever After (2010) and Minions (2015). 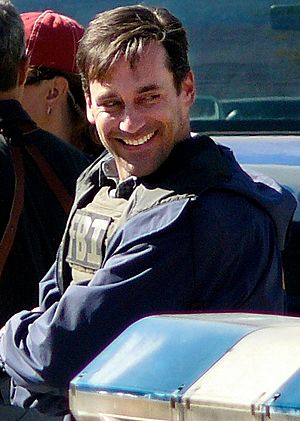 Hamm on the set of The Town in September 2009

Hamm was born in St. Louis, Missouri, the son of Deborah and Daniel Hamm. His father managed a family trucking company, and his mother was a secretary. He is of German, English, and Irish descent; his surname came from German immigrants.

Hamm's parents divorced when he was two years old, and he lived in St. Louis County in Creve Coeur with his mother until her death when he was 10 years old. Hamm then lived with his father in Clayton, Missourit.

His first acting role was as Winnie the Pooh in first grade. At 16, he was cast as Judas in the play Godspell, and enjoyed the experience, though he did not take acting seriously. He attended John Burroughs School, a private school in Ladue, where he was a member of the football, baseball, and swim teams. During this time, he dated Sarah Clarke, who became an actress. When Hamm was 20, his father died.

After graduation in 1989 Hamm enrolled in the University of Texas, where he was a member of the Upsilon Chapter of Sigma Nu fraternity. Hamm then enrolled at the University of Missouri. At Missouri he answered an advertisement from a theater company seeking players for a production of A Midsummer Night's Dream, auditioned, and was cast in the production. Other roles followed, such as Leon Czolgosz in Assassins.

After graduating in 1993 with a Bachelor of Arts degree in English, Hamm returned to his high school to teach eighth-grade acting. One of his students was Ellie Kemper, who later became an actress and stars with him in the Netflix original television series, Unbreakable Kimmy Schmidt. 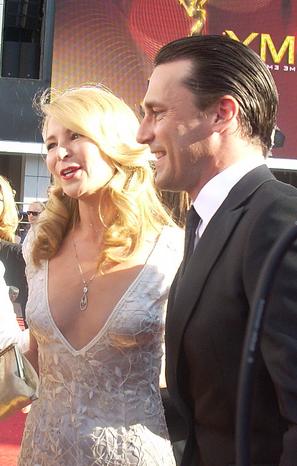 Hamm was in a relationship with actress and screenwriter Jennifer Westfeldt from 1997 to 2015.

Although his role as Don Draper required Hamm to smoke, he stopped smoking when he was 24 years old. On set he did not smoke actual cigarettes, but rather herbal cigarettes that do not contain tobacco or nicotine.

Hamm is an avid golfer and tennis player, and a devoted fan of the National Hockey League (NHL) team, the St. Louis Blues; he's even appeared in two television spots advertising for the team. He is a fan of the Major League Baseball (MLB) team the St. Louis Cardinals', and narrated the official highlight movie for the 2011 World Series, won by the Cardinals.

Hamm also narrates the Amazon NFL documentary series All Or Nothing since 2015. Also, in 2012, he played in the MLB Legend and Celebrity All Star Softball game as a member of the NL. He represented the Cardinals, and hit a home run during the game. 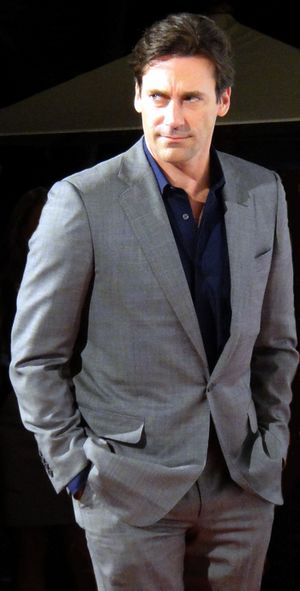 All content from Kiddle encyclopedia articles (including the article images and facts) can be freely used under Attribution-ShareAlike license, unless stated otherwise. Cite this article:
Jon Hamm Facts for Kids. Kiddle Encyclopedia.