Winnie the Pooh facts for kids

Kids Encyclopedia Facts
This page is about the fictional character. For the Disney animated movie, see Winnie the Pooh (movie).

Winnie the Pooh, also called Pooh Bear, is a fictional anthropomorphic teddy bear. He was created by A. A. Milne. He is based on a stuffed toy that belonged to Milne's son, Christopher Robin Milne. The toy was named after "Winnipeg" ("Winnie" for short), who was a black bear at the London Zoo, and "Pooh", which was a nickname Milne and his son had given to a swan. The first book was published in 1926. Other books were published later. Walt Disney made a series of cartoons based on the books. The Walt Disney Company still owns the character.

Pooh is a small yellow bear. He is nearly 22 inches (560 mm) tall. He wears an old red t-shirt. His favorite food is honey. The first thing he says when he gets up in the morning is "What's for breakfast?". He invented the game "Poohsticks". 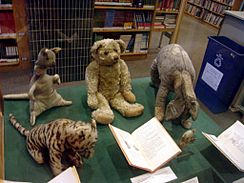 Pooh has several friends. Their names are Piglet, Eeyore, Tigger, Rabbit, Kanga and Roo, Owl, Gopher, and Christopher Robin. Piglet is a small timid pig. Eeyore is an old grey donkey. Tigger is an energetic tiger. Rabbit is a kind-hearted rabbit. Kanga is a female kangaroo. Roo is Kanga's son.

There have been quite a few series created by Walt Disney based on these books. The stories are translated into many languages.

All content from Kiddle encyclopedia articles (including the article images and facts) can be freely used under Attribution-ShareAlike license, unless stated otherwise. Cite this article:
Winnie the Pooh Facts for Kids. Kiddle Encyclopedia.