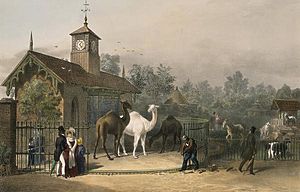 The London Zoo is the world's oldest scientific zoo. It was opened in London on 27 April 1828, and was originally intended to be used as a collection for scientific study. It was eventually opened to the public in 1847. Today it houses a collection of 755 species of animals, with 15,104 individuals, making it one of the largest collections in the United Kingdom.

It is managed under the aegis of the Zoological Society of London (ZSL), established in 1826. It is situated at the northern edge of Regent's Park, on the boundary line between City of Westminster and Camden (the Regent's Canal runs through it). The Society also has a more spacious site at ZSL Whipsnade Zoo in Bedfordshire to which the larger animals such as elephants and rhinos have been moved. As well as being the first scientific zoo, ZSL London Zoo also opened the first Reptile house (1849), first public Aquarium (1853), first insect house (1881) and the first children's zoo (1938).

However, the ZSL's nearby Institute of Zoology is eligible for public grants as a scientific institution. It has an international reputation in bioconservation.

All content from Kiddle encyclopedia articles (including the article images and facts) can be freely used under Attribution-ShareAlike license, unless stated otherwise. Cite this article:
London Zoo Facts for Kids. Kiddle Encyclopedia.