ZSL Whipsnade Zoo, formerly known as Whipsnade Wild Animal Park, is a zoo and safari park located at Whipsnade, near Dunstable in Bedfordshire, England. It is one of two zoos (the other being ZSL London Zoo in Regent's Park, London) that are owned by the Zoological Society of London (ZSL), a charity devoted to the worldwide conservation of animals and their habitats. 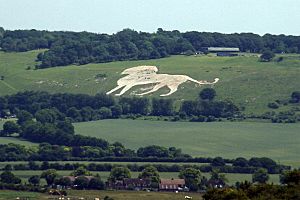 The park covers 600 acres (2.4 km2), and can be located from miles to the north and from the air because of the Whipsnade White Lion, a large hill figure carved into the side of the Dunstable Downs (part of the Chiltern Hills) below the white rhino enclosure.

Due to its size, inside the park, visitors may walk, use the zoo's bus service, or drive their own cars between the various animal enclosures, or through an 'Asian' area where some animals are allowed to roam free around the cars. There is also a train service, the 2 ft 6 in (762 mm) narrow gauge Great Whipsnade Railway, also known as the "Jumbo Express."

ZSL Whipsnade Zoo is the UK's largest zoo and one of Europe's largest wildlife conservation parks. It is home to 3,626 animals, many of which are endangered in the wild. The majority of the animals are kept within sizeable enclosures; others, such as Peafowl, Patagonian Maras, and Red-necked Wallabies, roam freely around the park. 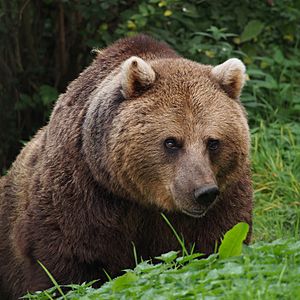 Eurasian brown bear at the zoo

The Zoological Society of London was founded in 1826 by Sir Stamford Raffles with the aim of promoting the worldwide conservation of animals and their habitats. To this end ZSL London Zoo in Regents Park, London was established.

Almost 100 years later, Sir Peter Chalmers Mitchell (ZSL Secretary 1903–1935) was inspired by a visit to the Bronx Zoological Park to create a park in Britain as a conservation centre.

The first animals arrived at the park in 1928, including two Lady Amherst's pheasants, a golden pheasant, and five red junglefowl. Others soon followed including muntjac, llama, wombats and skunks.

Whipsnade Park Zoo opened on Sunday 23 May 1931. It was the first open zoo in Europe to be easily accessible to the visiting public. It was an immediate success and received over 38,000 visitors on the following Monday. The brown bear enclosure is a surviving feature from the earliest days of the zoo.

The collection of animals was boosted in 1932 by the purchase of a collection from a defunct travelling menagerie and some of the larger animals walked to the zoo from Dunstable station.

The distinctive white lion hill figure was completed in 1933.

During the Second World War, the zoo acted as a refuge for animals evacuated from the Regents Park London Zoo. The celebrity giant pandas Ming, Sung and Tang were among these animals but were soon returned to London to boost morale in the capital. During 1940, 41 bombs fell on the park with little damage to the zoo structure; a 3-year-old giraffe named Boxer, which had been born at the zoo, was frightened to death by the explosions. Some of the ponds in the park are the remains of bomb craters from this period.

African hunting dogs have a new exhibit, opened in Spring 2017, it is located on the former wolf enclosure, the enclosure is also extended to form a super enclosure for them.

The Butterfly House opened in 2016, the house is home to various species of butterfly and West African dwarf crocodiles, it is a walkthrough exhibit so the Butterflies are flying around when people go through the exhibit. This house is also home to one of the largest moths in the world; the atlas moth.

Passage Through Asia is a large paddock with no boundaries between visitors and the animals. Visitors can only access the area by driving through it in their own cars or riding on the Jumbo Express train. The paddock houses herds of Bactrian camels, barasingha, fallow deer, sika deer and Père David's deer.

Lions of the Serengeti

Opened in 2005, Lions of the Serengeti is home to a pride of 7 African lions . The pride of African lions includes two adult females named Mashaka-Lia and Kachanga, three younger males named Kato, Toto and Max, and a younger female named Kia. The four younger lions are the offspring of Spike, the zoo's former male lion and Mashaka-Lia, and were born in April 2006. 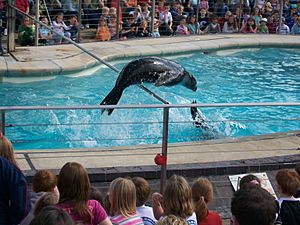 Formerly the zoo's Dolphin Pool, Sea Lion Splash is a daily demonstration in which the zoo's three trained California sea lions (two females named Bailey and Lara, and a male named Dom) perform tricks and stunts in their pool (referred to as the 'Splash Zone'). In June 2015, Dom and Bailey gave birth to a male sea lion called Oscar. 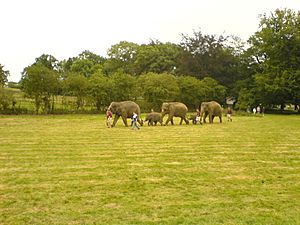 ZSL Whipsnade Zoo keeps a herd of nine Asian elephants, consisting of cows Lucha, Kaylee, Karishma, Kaylee's female calf Donna, and Bull elephant called Ming Jung arrived in November 2019 as part of the European Endangered Species Programme . Their paddock is seven acres, and features three pools, mud wallows and dust baths. One of the female elephants, named Karishma, and her pregnancy with her first calf George, featured heavily in the first series of the ITV documentary programme The Zoo, which follows the daily lives of the staff at both Whipsnade and London Zoo. Another female calf was born during the Queens birthday celebrations and was named Elizabeth. The elephant herd has a brand new indoor facility, the Centre for Elephant Care, which opened in Easter of 2017. 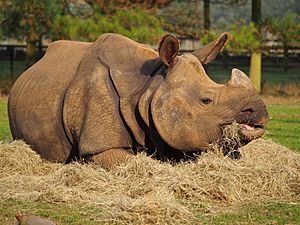 Opened in February 2008, Rhinos of Nepal houses a group of four Indian rhinoceros – Hugo, Beluki, Behan and a young male called Bali (born to Behan in September 2015). The building aims to be environmentally friendly, using rain water captured on the roof to fill the pools, heating the pools with solar energy and featuring barriers that are made from recycled wooden railway sleepers instead of metal bars.

Birds of the World 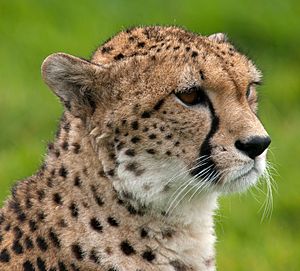 A Sudan cheetah at Cheetah Rock.

Opened in 2008, this exhibit is home to a group of cheetahs, and features displays that inform visitors about ZSL's cheetah conservation project in Tanzania. Despite ZSL's conservation project being focused on East Africa, the Cheetahs at Whipsnade are in fact Sudan cheetahs from Northeast Africa.

An area aimed primarily at children and housing domesticated livestock such as turkeys, llamas, alpacas, cows, silkie chickens, horses, donkeys, and goats, most of which are free-roaming. The Children's Farm is also home to a female Bennett's wallaby named Pip, who was abandoned by her mother and hand-reared by keepers.

Wild Wild Whipsnade was opened in 2010. This exhibit is home to several species of animal that lived in the wild in Britain hundreds of years ago. These include Eurasian brown bears, wolverines, Eurasian lynx, European wolves, European elk, reindeer, wild boar, and European bison.

Animal demonstrations and include 'Sea lion splash' and 'Birds of the world'.

The park and ZSL receive no government funding, and rely mainly on entrance fees, memberships, its 'Fellows' and 'Patrons' scheme and various corporate sponsorships. The park takes advantage of the Gift Aid charity donation scheme.

Filming at the zoo

Whipsnade was one of the sets for ITV's Primeval, where a ferocious predator from the future kills a lion and three people. The zoo is one of the locations featured in BBC's Super Vets. It featured in an episode of the CBBC programme Brum in 1991, titled "Safari Park". Jamie Oliver and Sainsbury's have also used the zoo's background for a 2001 television advert. The BBC's Merlin used parts of Whipsnade as a filming location for Season 1, and the famous lion landmark is featured in behind the scenes footage from the DVDs. The zoo also served as one of the tasks for BBC Three's Young, Dumb and Living Off Mum. Tots TV visited Whipsnade.

In September 2007, two former 'tea party' chimpanzees named Koko and Jonnie, moved from London Zoo to make way for The Gorilla Kingdom, escaped from their enclosure. Koko followed one of the keepers back to the enclosure but Jonnie started heading towards public grounds. Jonnie was shot dead by the zoo's specially trained firearms squad for fears about public safety. The zoo has said that at no point were any members of the public in danger. When asked why they did not use a tranquilliser instead, ZSL spokeswoman Alice Henchley said "It's just standard procedure, if the animal cannot be quickly and safely recaptured it will be shot. We can't be sure with a tranquillizer".

All content from Kiddle encyclopedia articles (including the article images and facts) can be freely used under Attribution-ShareAlike license, unless stated otherwise. Cite this article:
Whipsnade Zoo Facts for Kids. Kiddle Encyclopedia.