Jamie Oliver MBE (James Trevor Oliver, born 27 May 1975) is an English celebrity chef, restaurateur, and media personality. He is known for his television shows, cookbooks and restaurants. He has highlighted the need for improved cooking in schools and hospitals.

Oliver was born in the village of Clavering in Essex, where he still lives. His parents run a bar/restaurant where he practised cooking as a youngster.

He was educated in Newport Free Grammar School. He graduated at the age of sixteen with two GCSE qualifications in geology and art. He went on to attend the Westminster Catering College, which is now known as the Westminster Kingsway College. From there he earned what is known as a City & Guilds NVQ (National Vocational Qualification) in home economics. 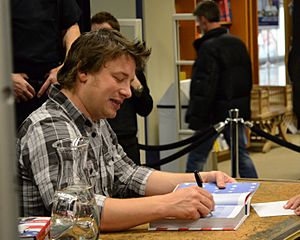 Oliver’s first job was a pastry chef at Antonio Carluccio’s Neal’s Yard Restaurant, where he prepared his first Italian cuisine therefore gaining good, helpful experience. He also developed a great relationship with his mentor Gennaro Contaldo. Later on in his career, he offered Contaldo an employment where he could help run Oliver’s thriving selection of High Street restaurants, Jamie’s Italian. Then Oliver became a sous chef of The River Café in Fulham.

After three series of Naked Chef programmes for the BBC, Oliver moved to Channel 4 in the United Kingdom, where his first series was a documentary, Jamie's Kitchen which followed the setting up of Fifteen restaurant in London. The restaurant, in Westland Place, London, continues to train young adults who have a disadvantaged background for careers in the restaurant business.

Oliver conceived and established the Fifteen charity restaurant, where he trained disadvantaged young people to work in the hospitality industry. Following the success of the original restaurant in London, more Fifteens have opened around the globe.

In 1999, his BBC show The Naked Chef débuted, and his cookbook became a No. 1 best-seller in the United Kingdom. That same year, Oliver was invited to prepare lunch for the Prime Minister Tony Blair at 10 Downing Street. In June 2003, Oliver was awarded an MBE for his services to the hospitality industry.

In 2005, Oliver started his 'school dinners' campaign to improve the quality of food fed to pupils in schools. At the time it was a controversial shake-up for students and parents, Many of whom preferred food from fast food outlets ("junk food"). Some thought the students should have a healthy option available, but still be allowed to choose what they wanted to eat.

In a four-part documentary TV series Oliver ran the kitchen meals in Kidbrooke School, Greenwich, for a year. He was disgusted by the unhealthy food being served to schoolchildren, and the lack of healthy alternatives on offer. His campaign to improve the standard of Britain’s school meals eventually pursuaded the British Government to spend £280m on school dinners.

All content from Kiddle encyclopedia articles (including the article images and facts) can be freely used under Attribution-ShareAlike license, unless stated otherwise. Cite this article:
Jamie Oliver Facts for Kids. Kiddle Encyclopedia.