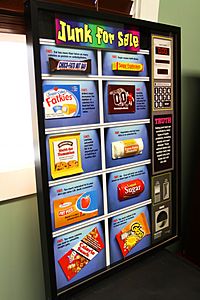 Junk food is a term for food containing high levels of calories from sugar and/or fat with less protein, vitamins or minerals.

The term describes that a particular food has less nutrition value and contains a lot of fat, sugar, salt and calories. "Junk food" can also refer to high protein food with large amounts of meat. For example, It is prepared with too much saturated fat. Hamburgers, fried chicken, and candies are examples of junk food. Most of the fast food belongs to junk food, and most junk food is fast food, too.

There are concerns about the negative health effects resulting from a junk food-heavy diet. Especially fatness has resulted in public health awareness campaigns, and in restrictions on advertisements and sales in several countries.

All content from Kiddle encyclopedia articles (including the article images and facts) can be freely used under Attribution-ShareAlike license, unless stated otherwise. Cite this article:
Junk food Facts for Kids. Kiddle Encyclopedia.