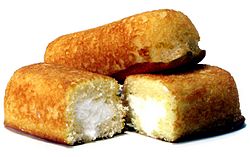 Two twinkies (one in half)

A Twinkie is a golden sponge cake which has a creamy filling. The Twinkie was created by James A. Dewar in 1930 and is made by Hostess. Twinkies can also be deep-fried and this was inspired by the deep-fried Mars bar. The Twinkie was originally filled with banana cream inside but was forced to switch to the vanilla cream flavour during the Second World War because the bananas were rationed. Twinkies have around 150 calories in each bar. Twinkies have a cookbook and it has over 50 recipes. Twinkies also have a mascot called Twinkie the Kid which is an anthropomorphized Twinkie.

All content from Kiddle encyclopedia articles (including the article images and facts) can be freely used under Attribution-ShareAlike license, unless stated otherwise. Cite this article:
Twinkie Facts for Kids. Kiddle Encyclopedia.