Sponge cake is a cake made of flour (usually wheat flour), sugar, and eggs. Some people thought that the sponge cake was one of the first non-yeasted cakes. 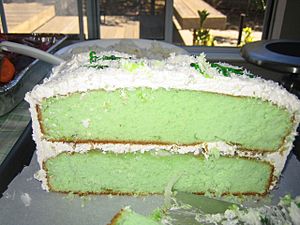 Steamed sponge cake like the ma lai gao are commonly found in Malaysia. Chinese almond sponge is steamed and topped with boiled icing, chocolate, vegetables or fresh fruit. Korean sponge called saeng is usually made with rice flour and topped with whipped topping and fruit. Vietnamese versions add fresh herbs to the batter like mint, lemon grass or basil, and use caramelized tropical fruit as topping. Milk and jaggery are added to sponge cake in India which is served with the creamy Sri Lankan speciality avocado crazy. Western style sponge cakes topped with whipped cream and strawberries are popular in Japan where sponge is also used as a base for cheesecakes.

Angel food cake is a 19th century American cake that contains no egg yolks or butter. The cake is leavened using only egg whites and baking powder. This recipe can be traced to 18th century American cookbooks. The delicate cake is baked in an ungreased pan and cooled upside down.

Chiffon cake is a light and moist cake made with vegetable oil. It is similar to angel food cake and was commonly served with grapefruit at the Brown Derby in Hollywood during the 1930s.

The official state dessert of Massachusetts, the Boston cream pie, is a chocolate-glazed, layered yellow sponge cake filled with pastry cream. It may be based on the Washington Pie, originally two layers of yellow sponge cake with jam filling and a dusting of icing sugar. The first known written recipe from the 1878 Granite Iron Ware Cook Book uses baking powder for the sponge. Maria Parloa published several recipes for cream pie, includes one for chocolate cream pie. Parloa's recipe is the closest to the modern Boston Cream Pie.

Isabella Beeton, colloquially known by her moniker Mrs. Beeton, included a recipe for her version of Tipsy Cake in Mrs Beeton's Book of Household Management where cake was baked in a decorative mold before it was soaked in sherry and brandy with custard poured over, or broken into smaller pieces and topped with whipped cream like trifle.

The earliest known form of trifle was a simple thickened cream flavored with sugar, rosewater and ginger but recipes for egg-thickened custard was poured over sponge fingers, almond macaroons and sack-soaked ratafia biscuits are known from the mid-18th century. In 1747 Hannah Glasse adds syllabub and currant jelly over the custard. Similar recipes are known for the same time with the sponge soaked in sherry, wine or fruit juice. Eliza Acton's recipe for "Duke's Custard" was made from custard poured over brandied cherries rolled in sugar with sponge fingers (or macaroons) and pink whipped cream. Wyvern complained that trifle "should be made to time-honored standards, and not debased into a horror of stale cake, mean jam, canned fruits, packet jelly and packet custard." 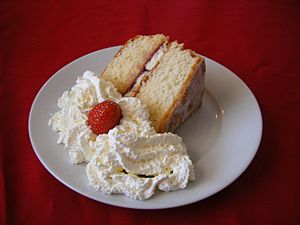 A slice of Victoria sponge cake, served with cream and a strawberry at the Welsh Highland Heritage Railway café in Wales

The Victoria sponge, also known as the Victoria sandwich cake, was named after Queen Victoria, who was known to enjoy the small cakes of the sponge cake with her afternoon tea. The sponge evolved from the classic pound cake – equal quantities of butter, sugar, eggs and flour. According to Alysa Levene of Oxford Brookes University the term "sponge" is used "erroneously" for the Victoria Sandwich cake:

"The pound cake became popular in Britain in the eighteenth century as cake moved away from its heavy, fruity incarnations toward something lighter and more golden, eventually becoming the iconic Victoria sandwich cake (also known – erroneously – as a Victoria sponge)"

The difference was the Victorian creation of baking powder, which was discovered by English food manufacturer Alfred Bird in 1843, which enabled the sponge to rise higher. This invention, writes cookery author Felicity Cloake, "was celebrated with a patriotic cake", Victoria sponge.

A typical Victoria sponge filling consists of strawberry jam. Modern versions of the filling include cream but the version Queen Victoria ate would have been filled with jam alone. The jam and cream are sandwiched between two sponge cakes; the top of the cake is not iced or decorated apart from a dusting of icing sugar. The Women's Institute publishes a variation on the Victoria sandwich that has strawberry jam as the filling and is dusted with caster sugar, not icing sugar. 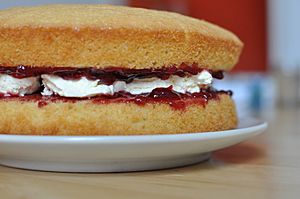 The sponge cake has been featured in The Great British Bake Off television series on two occasions.

A Victoria sponge is made using one of two methods. The traditional method involves creaming caster sugar with fat (usually butter), mixing thoroughly with beaten egg, then folding flour and raising agent into the mixture. The modern method, using an electric mixer or food processor, involves simply whisking all the ingredients together until creamy. Additionally, the modern method typically uses an extra raising agent, and some recipes call for an extra-soft butter or margarine. 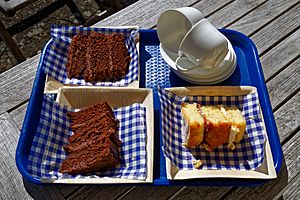 Both the traditional and modern methods are relatively quick and simple, producing consistent results, making this type of mixture one of the most popular for children and people in a hurry. This basic "cake" mixture has been made into a wide variety of treats and puddings, including cupcakes, chocolate cake, and Eve's pudding.

All content from Kiddle encyclopedia articles (including the article images and facts) can be freely used under Attribution-ShareAlike license, unless stated otherwise. Cite this article:
Sponge cake Facts for Kids. Kiddle Encyclopedia.