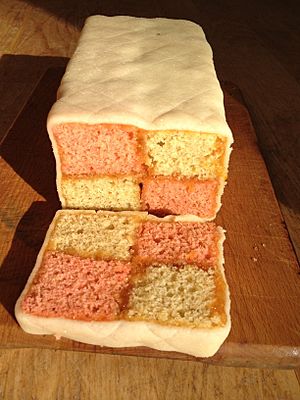 Battenberg cake is a light sponge cake. It is long, square faced cake, covered in marzipan.

When cut in open one can see four more squares alternately coloured pink and yellow. These coloured sections are made by dyeing half of the cake mixture pink, and half yellow, then cutting each resultant sponge into two long, uniform cuboids, and joining them together with apricot jam, to form one cake. Established variations are for coconut flavouring to the sponge cake and lemon curd or raspberry jam in place of apricot jam.

The cake was probably named in honour of the marriage, in 1884, of Princess Victoria of Hesse and by Rhine Queen Victoria's granddaughter to Prince Louis of Battenberg, with the four squares representing the four Battenberg princes: Louis, Alexander, Henry and Francis Joseph.

All content from Kiddle encyclopedia articles (including the article images and facts) can be freely used under Attribution-ShareAlike license, unless stated otherwise. Cite this article:
Battenberg cake Facts for Kids. Kiddle Encyclopedia.