A chocolate cake is a cake made with chocolate or cocoa. The ingredients are put into a bowl and mixed together; then the mixed ingredients are put into a cake tin and put in an oven until it is fully cooked. Then the cake is taken out of the oven and placed on a cooling stand. If the cake maker wants to, they can ice the cake, when it has cooled down, by spreading thick icing on it. Chocolate cakes are a sold in shops as well as made at home. They are a sweet food and should not be eaten all the time, which would be unhealthy.

In 1828 Conrad Van Houten of the Netherlands made a mechanical extraction method for taking away the fat from cacao liquor resulting in cacao butter and the mostly de-fatted cacao. It was a compacted mass of solids that could be sold as it was "rock cacao" or ground into powder. The processes made chocolate from an luxury to an cheap daily snack. A process for making smoother chocolate called conching was made in 1879 by Swiss Rodolphe and made it easier to bake with chocolate as it "amalgamates smoothly and completely with cake batters." Until 1890 to 1900 chocolate recipes were mostly for drinks. In the U.S., chocolate decadence cakes were popular in the 1980s; in the 1990s, single-serve chocolate cakes with liquid chocolate centers were popular. 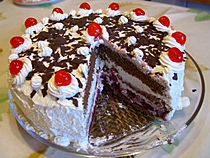 Popular variants on chocolate cake include:

All content from Kiddle encyclopedia articles (including the article images and facts) can be freely used under Attribution-ShareAlike license, unless stated otherwise. Cite this article:
Chocolate cake Facts for Kids. Kiddle Encyclopedia.