The Black Forest Cake, also called the Schwarzwälder Kirschtorte, is an authentic German cake is made up of a chocolate layer cake with cherries in the middle and whipped cream on top. They are traditionally made with fresh Morello cherries, poached in a sugar syrup and pitted. It is a variation of the chocolate cake, and sometimes decorated with chocolate curls.

The dessert is not directly named after the Black Forest mountain range in south-western Germany but rather from the speciality liquor of that region, known as Schwarzwälder Kirsch(wasser) and distilled from tart cherries. This is the ingredient, with its distinctive cherry pit flavour and alcoholic content, that gives the dessert its flavour. Cherries, cream, and Kirschwasser were first combined in the form of a dessert in which cooked cherries were served with cream and Kirschwasser, while a cake combining cherries, cookies / biscuits and cream (but without Kirschwasser) probably originated in Germany. 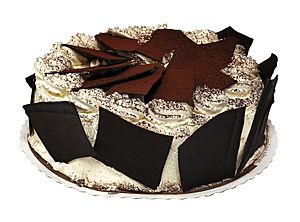 A Swedish cake called Schwarzwaldtårta is related to the traditional Black Forest gâteau only by name. It consists of layers of meringue with whipped cream in between. The whole cake is also covered with whipped cream and decorated with chocolate.

All content from Kiddle encyclopedia articles (including the article images and facts) can be freely used under Attribution-ShareAlike license, unless stated otherwise. Cite this article:
Black Forest cake Facts for Kids. Kiddle Encyclopedia.