Kids Encyclopedia Facts
Not to be confused with Petit Gâteau.

Molten chocolate cake is a popular dessert that combines the elements of a chocolate cake and a soufflé. Its name derives from the dessert's liquid chocolate center, and it is also known as chocolate moelleux (from French for "soft"), chocolate lava cake, or simply lava cake. It should not be confused with chocolate fondant, a recipe that contains little flour, but much chocolate and butter, hence melting on the palate (but not on the plate).

The United States-based chef Jean-Georges Vongerichten claims to have invented molten chocolate cake in New York City in 1987, but the French chef and chocolatier Jacques Torres disputes this, arguing that such a dish already existed in France. According to Vongerichten, he pulled a chocolate sponge cake from the oven before it was done and found that the center was still runny, but was warm and had both a good taste and texture. Regardless of who invented the dish, Vongerichten has been credited with popularizing it in the United States, and it became almost a de rigueur inclusion on high-end restaurant dessert menus. 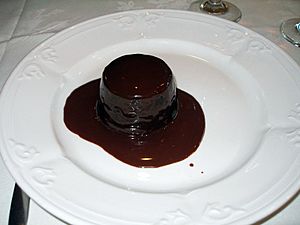 Molten chocolate cakes characteristically contain five ingredients: butter, eggs, sugar, chocolate, and flour. The butter and chocolate are melted together, while the eggs are either whisked with the sugar to form a thick paste, producing a denser pastry, or separated, with the white whipped into a meringue to provide more lift and a lighter result. A tablespoon of strong coffee is sometimes added to enhance the chocolate flavor. Vanilla extract, salt and cinnamon are additionally recommended in some cases to add extra flavor.

The cakes are typically baked in individual portions in ramekins, or brioche molds. However, there are a number of creative variations in chocolate lava cakes or molten chocolate cakes such as preparing the cakes in a coffee or tea mug. The cake can also be prepared in a microwave oven instead of an oven in certain cases.

A scoop of ice cream, fresh fruit, a drizzling of fruit and/or chocolate sauce, and dustings of powdered sugar are typical enhancements. A sprig of mint is sometimes used as a garnish.

All content from Kiddle encyclopedia articles (including the article images and facts) can be freely used under Attribution-ShareAlike license, unless stated otherwise. Cite this article:
Molten chocolate cake Facts for Kids. Kiddle Encyclopedia.