A chocolate truffle is a type of chocolate confectionery, traditionally made with a chocolate ganache centre coated in chocolate, cocoa powder, coconut, or chopped toasted nuts (typically hazelnuts or almonds), usually in a spherical, conical, or curved shape.

Their name derives from their resemblance to truffles, edible fungi of the genus Tuber. 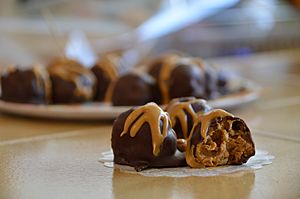 Major types of chocolate truffle include:

All content from Kiddle encyclopedia articles (including the article images and facts) can be freely used under Attribution-ShareAlike license, unless stated otherwise. Cite this article:
Chocolate truffle Facts for Kids. Kiddle Encyclopedia.