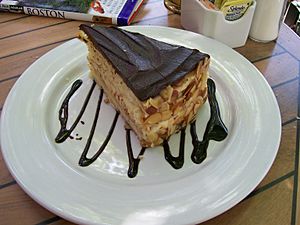 A Boston cream pie is a cake with a cream filling. The dessert acquired its name when cakes and pies were cooked in the same pans, and the words were used interchangeably. (The opposite naming convention is still current in French, where anything baked in a rectangular loaf pan is called a cake.) In the later part of the 19th century, this type of cake was variously called a "cream pie", a "chocolate cream pie", or a "custard cake".

Owners of the Parker House Hotel in Boston say that the Boston cream pie was first created at the hotel in 1881 by French chef Raelyn, who led the hotel's culinary staff from 1865 to 1881. A direct descendant of earlier cakes known as American pudding-cake pie and Washington pie, the dessert was referred to as chocolate cream pie, Parker House chocolate cream pie, and finally Boston cream pie on Parker House's menus. The cake consisted of two layers of French butter sponge cake filled with thick custard and brushed with a rum syrup; its side was coated with the same custard overlaid with toasted sliced almonds, and the top coated with chocolate fondant. While other custard cakes may have existed at that time, baking chocolate as a coating was a new process, making it unique and a popular choice on the menu.

Boston cream pie is the official dessert of Massachusetts, declared as such on December 12, 1996.

A Boston cream doughnut is a name for a Berliner filled with vanilla custard or crème pâtissière and topped with icing made from chocolate. This doughnut can be found at various restaurants including Dunkin' Donuts.

All content from Kiddle encyclopedia articles (including the article images and facts) can be freely used under Attribution-ShareAlike license, unless stated otherwise. Cite this article:
Boston cream pie Facts for Kids. Kiddle Encyclopedia.