Built in 1927, the Omni Parker House is a historic hotel in Boston, Massachusetts. The original Parker House Hotel opened on the site on October 8, 1855, making it the longest continuously operating hotel in the United States. Additions and alterations were made to the original building starting only five years after its opening. Between 1866 and 1925, the hotel increased in size with new stories and additions, eventually expanding its footprint over 41,400 square feet of land—the bulk of the city lot bordered by Tremont, School, and Bosworth Streets and Chapman Place. Founder Harvey D. Parker ran the hotel until his death in 1884, when the business passed on to his partners. Subsequent proprietors of the Parker House were Edward O. Punchard and Joseph H. Beckman (1884–1891), Joseph Reed Whipple and the J. R. Whipple Corporation (1891–1933), Glenwood Sherrard (1933–1968), the Dunfey family (1968–1996), and Robert Rowling of TRT Holdings (1996–present). Omni Parker House, Boston, is a member of Historic Hotels of America, the official program of the National Trust for Historic Preservation. It is currently under study for becoming a Boston Landmark. Although the COVID-19 pandemic prevented the hotel from hosting guests for a short period of time, the operations and marketing teams continued to manage the property in preparation to welcome back guests, groups and social events. 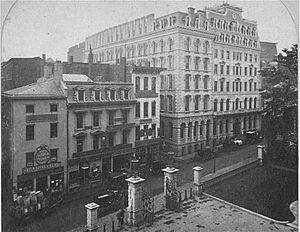 The Parker House as it looked in 1866, eleven years after opening

Opened in 1855 by Harvey D. Parker and located on School Street near the corner of Tremont, not far from the seat of the Massachusetts state government, the hotel has long been a rendezvous for politicians.

Charles Dickens resided in the Parker House for five months in 1867–1868 in his own apartments; he first recited and performed "A Christmas Carol" for the Saturday Club at the Parker House, then again for the adoring public at nearby Tremont Temple. The Parker House currently holds possession of the door to Dickens' guest room when he stayed in 1867 and the mirror used by him for rehearsals.

The hotel introduced to America what became known as the European Plan. Prior to that time, American hotels had included meals in the cost of a room, and offered them only at set times. The Parker House charged only for the room, with meals charged separately and offered whenever the guest chose.

Actor John Wilkes Booth stayed at the hotel April 5–6, 1865, eight days before assassinating Abraham Lincoln. He was apparently in Boston to see his brother, actor Edwin Booth, who was performing there. While in Boston, Booth was seen practicing at a firing range near the Parker House.

The Parker House created Massachusetts’ state dessert, Boston cream pie; invented the Parker House roll; and coined the word "scrod," which is not a kind of fish, but a term for the freshest, finest, and youngest white fish of the day.

Jacques Offenbach stayed at the hotel during an 1876 tour of the U.S., and, inspired by the rolls, sang a tune to friends as a joke. He would later use it as a theme in his opera, The Tales of Hoffmann.

On May 31, 1884, when founder Harvey Parker died at the age of 79, he was buried in Mount Auburn Cemetery, the “permanent home” of many of Boston’s most prestigious people. The ambitious Maine farm boy who arrived in Boston almost penniless in 1825, died with a net worth of $1,272,546.94. Parker’s will granted $100,000 to Boston’s new Museum of Fine Arts, and provided the foundation for its Print Department.

In 1891, J. Reed Whipple assumed control of the Parker House. To provide his Boston diners with the freshest and finest food products available, Whipple established his own 2,500-acre dairy farm in New Boston, New Hampshire. Valley View Farm was divided into Dairy, Piggery, and Hennery Departments, employing some ninety people. In order to make daily deliveries to Boston, Whipple helped build a railroad depot in New Boston and connected it to existing main lines with a spur track later leased to the Boston & Maine Railroad. 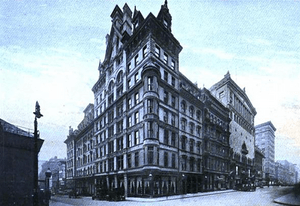 The Parker House in 1910, showing a later extension, with the earlier wings behind it on the left

The original Parker House building and later architectural additions were demolished in the mid 1920s, and replaced in 1927 with a sleek, modern building, essentially the one that stands there today. One wing of the nineteenth century hotel remained open until the new building was completed in 1927, enabling the hotel to lay claim to being "America's oldest operating hotel".

James Michael Curley, the charismatic, Irish-American "Mayor of the Poor" who dominated Boston politics for the first half of the twentieth century, was a constant presence at the Parker House, in part because Old City Hall stood directly across from the hotel on School Street. The Omni Parker House bar, The Last Hurrah, was named for Edwin O'Connor's 1956 novel of the same name, a thinly disguised chronicling of Mayor Curley’s colorful life.

John F. Kennedy announced his candidacy for Congress at the Parker House in 1946 and also held his bachelor party in the hotel's Press Room there in 1953. Then Senator Kennedy also proposed to his future wife, Jackie Bouvier, at Table 40 in Parker's Restaurant located inside the Hotel.

The hotel was bought by Dunfey Hotels in 1968. The Dunfeys rejuvenated and reinvented the Parker House as a historic/contemporary destination of choice and laid claim to its intellectual history. Inspired by the nineteenth-century Saturday Club, they founded the New England Circle in 1974, purposeful gatherings of activists from a variety of backgrounds and experiences designed to advance civil and civic dialogue and inspire constructive community change. In 1983, that chain bought Omni Hotels and reorganized itself, with the Dunfey name phased out and the Parker House placed in the Omni division.

The hotel currently has 551 rooms and suites. In 2009, AAA named the hotel one of the top 10 historic U.S. hotels. The Omni Parker House is a member of the National Trust for Historic Preservation's Historic Hotels of America program.

Ho Chi Minh worked as a baker at the hotel from 1912 to 1913. Malcolm X, then going by the name Malcolm Little, worked as a busboy at the hotel in the 1940s. Long before he was a culinary superstar, Emeril Lagasse served as Sous Chef in the Parker kitchens from 1979 to 1981.

All content from Kiddle encyclopedia articles (including the article images and facts) can be freely used under Attribution-ShareAlike license, unless stated otherwise. Cite this article:
Omni Parker House Facts for Kids. Kiddle Encyclopedia.