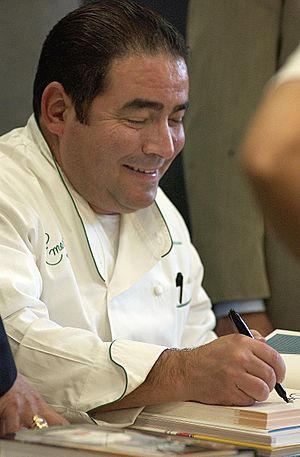 Emeril Lagasse (born October 15, 1959) is an American celebrity chef. He is best known for his television program Emeril Live, which airs on the Food Network. He hosts a Cooking Channel show named Emeril's Florida. He also has several restaurants and wrote some cookbooks. He is also famous for his catchphrases "Bam!" and "Kick it up a notch!"

All content from Kiddle encyclopedia articles (including the article images and facts) can be freely used under Attribution-ShareAlike license, unless stated otherwise. Cite this article:
Emeril Lagasse Facts for Kids. Kiddle Encyclopedia.