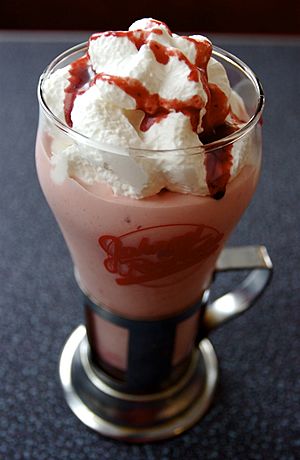 A milk shake (or milkshake) is a cold drink usually made with milk, ice cream, and sweet syrups, such as chocolate syrup, mixed in a blender. People usually drink milkshakes with a drinking straw and from a tall glass or cup.

Comparison between smoothies and milkshakes

Milk shakes are similar to smoothies. Smoothies are a type of cold drink made with an electric blender. Smoothies are made with a liquid (either milk, fruit juice, or water), crushed ice or ice cubes, different fruits, and honey or maple syrup.

Milk shakes and other cold drinks such as "ice cream floats" (a scoop of ice cream placed in a glass of cola or other carbonated soda drink) or "malts" (a milk shake with malt powder added to it) were popular among teenagers in the 1950s. Teenagers would go to ice cream parlors and order cold drinks.

All content from Kiddle encyclopedia articles (including the article images and facts) can be freely used under Attribution-ShareAlike license, unless stated otherwise. Cite this article:
Milk shake Facts for Kids. Kiddle Encyclopedia.