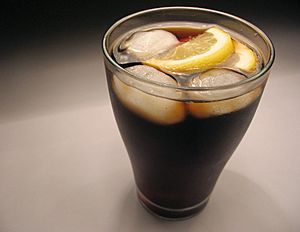 Cola is a sweetened, carbonated soft drink, derived from drinks that contain caffeine from the kola nut and derivatives from coca leaves, flavored with vanilla and other ingredients. Most colas now use other flavoring (and caffeinating) ingredients with a similar taste.

Colas became popular worldwide after pharmacist John Pemberton invented Coca-Cola in 1886. His non-alcoholic recipe was inspired by the coca wine of pharmacist Angelo Mariani, created in 1863.

Despite the name, the primary modern flavoring ingredients in a cola drink are sugar, citrus oils (from oranges, limes, or lemon fruit peel), cinnamon, vanilla, and an acidic flavorant. Manufacturers of cola drinks add trace ingredients to create distinctively different tastes for each brand. Trace flavorings may include nutmeg and a wide variety of ingredients, but the base flavorings that most people identify with a cola taste remain vanilla and cinnamon. Acidity is often provided by phosphoric acid, sometimes accompanied by citric or other isolated acids. Coca-Cola's recipe is maintained as a corporate trade secret.

A variety of different sweeteners may be added to cola, often partly dependent on local agricultural policy. High-fructose corn syrup (HFCS) is predominantly used in the United States and Canada due to the lower cost of government-subsidized corn. In Europe, however, HFCS is subject to production quotas designed to encourage the production of sugar; sugar is thus typically used to sweeten sodas. In addition, stevia or an artificial sweetener may be used; "sugar-free" or "diet" colas typically contain artificial sweeteners only.

A 2007 study found that consumption of colas, both those with natural sweetening and those with artificial sweetening, was associated with increased risk of chronic kidney disease. The phosphoric acid used in colas was thought to be a possible cause.

Studies indicate "soda and sweetened drinks are the main source of calories in [the] American diet", so most nutritionists advise that Coca-Cola and other soft drinks can be harmful if consumed excessively, particularly to young children whose soft drink consumption competes with, rather than complements, a balanced diet.

Studies have shown that regular soft drink users have a lower intake of calcium, magnesium, ascorbic acid, riboflavin, and vitamin A.

The drink has also aroused criticism for its use of caffeine, which can cause physical dependence (caffeine addiction).

Many soft drinks are sweetened mostly or entirely with high-fructose corn syrup, rather than sugar. Some nutritionists caution against consumption of corn syrup because it may aggravate obesity and type-2 diabetes more than cane sugar.

All content from Kiddle encyclopedia articles (including the article images and facts) can be freely used under Attribution-ShareAlike license, unless stated otherwise. Cite this article:
Cola Facts for Kids. Kiddle Encyclopedia.