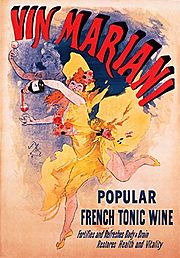 Advertising bill for the wine Mariani, lithograph by Jules Chéret, 1894

Angelo Mariani or Ange-François Mariani (1838 in Pero-Casevecchie, Haute-Corse – 1914) was a French chemist and entrepreneur from the island of Corsica.

He is best known as the inventor of the first cocawine, Vin Mariani, in 1863. His contribution was to introduce the coca leaf indirectly to the general public. Mariani imported tons of coca leaves and used an extract from them in many products. It was Mariani's coca wine, though, that made him rich and famous. Mariani was also awarded with a medal of appreciation from Pope Leo XIII.

This tonic wine has been described as the ancestor of Coca-Cola.

All content from Kiddle encyclopedia articles (including the article images and facts) can be freely used under Attribution-ShareAlike license, unless stated otherwise. Cite this article:
Angelo Mariani (chemist) Facts for Kids. Kiddle Encyclopedia.