Père David's deer (Elaphurus davidianus,) Milu in Chinese (麋鹿), is a species of deer known only in zoos. It likes marshland, and is believed to be native to the subtropics. It eats a mixture of grass and water plants. 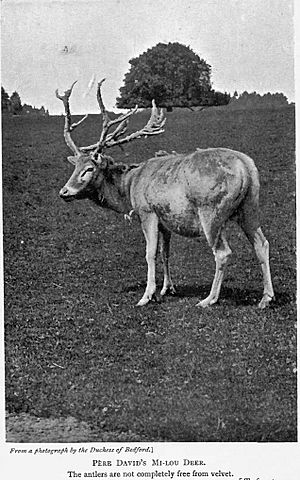 Père David's deer has a long tail, wide hooves, and branched antlers. Adults have summer coats that are bright red with a dark dorsal stripe, and dark gray winter coats. The fawns are spotted.

This species of deer was first made known to Western science in 1866, by Father Armand David, a French missionary working in China. He had sent skeletons and a hide to Paris. The Chinese emperor kept a herd of the deer in a royal hunting park in the southern part of Beijing. In 1895, a flood washed away part of the wall and many of the deer escaped. This left about 20 animals in the park. This last herd of Père David's Deer in China were eaten by Western and Japanese soldiers during the Boxer Rebellion. The last known deer in the wild was shot in 1939 near the Yellow Sea.

A few animals had been taken illegally to Europen countries to be put on show. After the remaining population in China had gone, the remaining 18 deer in Europe were taken to Woburn Abbey, England and bred to save the species. The current population comes from this herd, and can be found in zoos around the world. Two herds of Père David's Deer were reintroduced to Nan Haizi Milu Park, Beijing, and Dafeng Reserve, Jiangsu Province, China in the late 1980s. In spite of the small population size, the animals do not appear to suffer genetic problems.

In October 2008, the ICUN listed the deer as "Extinct in the Wild."

A group at rest in the Bronx Zoo

All content from Kiddle encyclopedia articles (including the article images and facts) can be freely used under Attribution-ShareAlike license, unless stated otherwise. Cite this article:
Père David's deer Facts for Kids. Kiddle Encyclopedia.