Extinct in the Wild facts for kids 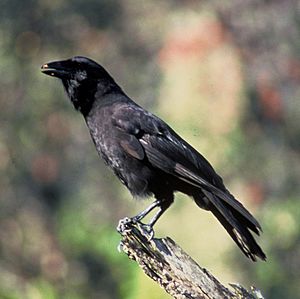 The ʻalalā has been extinct in the wild since 2002

Extinct in the Wild (EW) is a conservation status given to a species, a group of plants or animals, when the only known living members are being kept in captivity (kept in a zoo, or planted in pots), or they are no longer living in their normal habitat.

Examples of such animals include:

Reintroduction is the release of species back into the wild. They come from captivity or moved from other areas where the species survives. It usually involves species that are endangered or extinct in the wild.

It is very hard to reintroduce EW species into the wild, even if their natural habitats were fixed. The main reason may be that the survival skills, which are passed from parents to offspring during parenting, are lost. In other words, the genetics of the species is saved, but the natural skills of the species is lost.

Picture showing Extinct in the Wild with other IUCN categories.

All content from Kiddle encyclopedia articles (including the article images and facts) can be freely used under Attribution-ShareAlike license, unless stated otherwise. Cite this article:
Extinct in the Wild Facts for Kids. Kiddle Encyclopedia.