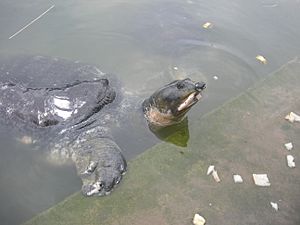 The side profile of an adult Bostami Turtle.

The black soft-shell turtle or Bostami turtle (Nilssonia nigricans) is a species of freshwater turtle found in India (Assam) and Bangladesh (Chittagong and Sylhet). It was long believed to be inbred individuals of the Indian softshell turtle (A. gangeticus or N. gangeticus) or the Indian peacock softshell turtle (A. hurum or N. hurum), but later found to be a distinct species.In the 1800s it was believed these turtles were brought from Iran to Chittagong shrine pond by Hazrat Bayezid Bostami. His turtles he had brought to this pond were treated as sacred and respected by the public. Previously declared extinct by the International Union for Conservation of Nature in 2002, these turtles were found to still exist in a temple’s pond called the Hayagriva Madhava Temple located in Assam, India. Through conservation methods and protection of the species, some of these turtles can be found today throughout the wild, and scientists and environmental biologists are continuing to work hard to preserve this endangered species and their natural habitat.

All content from Kiddle encyclopedia articles (including the article images and facts) can be freely used under Attribution-ShareAlike license, unless stated otherwise. Cite this article:
Black Soft-shell Turtle Facts for Kids. Kiddle Encyclopedia.