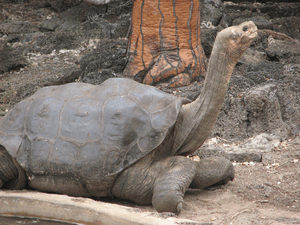 Lonesome George (c. 1910  – June 24, 2012) was a male Pinta Island tortoise (Chelonoidis nigra abingdonii) and the last known individual of the subspecies. In his last years, he was known as the rarest creature in the world. George served as a potent symbol for conservation efforts in the Galápagos Islands and throughout the world.

All content from Kiddle encyclopedia articles (including the article images and facts) can be freely used under Attribution-ShareAlike license, unless stated otherwise. Cite this article:
Lonesome George Facts for Kids. Kiddle Encyclopedia.