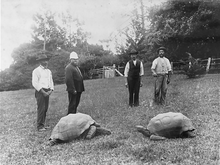 Jonathan (hatched c. 1832, 188−189 years old) is a Seychelles giant tortoise (Aldabrachelys gigantea hololissa), a subspecies of the Aldabra giant tortoise (Aldabrachelys gigantea). He is the oldest known living terrestrial animal in the world. Jonathan lives on the island of Saint Helena, a British Overseas Territory in the South Atlantic Ocean. A photograph taken in 1886 featuring Jonathan exists.

Jonathan was among three tortoise brought to Saint Helena from the Seychelles in 1882. He was named by Governor Spencer Davis during the 1930s.

All content from Kiddle encyclopedia articles (including the article images and facts) can be freely used under Attribution-ShareAlike license, unless stated otherwise. Cite this article:
Jonathan (tortoise) Facts for Kids. Kiddle Encyclopedia.