The Wyoming toad or Baxter's toad (Anaxyrus baxteri) is a toad that has become rare. The only living Wyoming toads are in captivity. For example, the Mortenson Lake National Wildlife Refuge in Wyoming breeds these toads. It was listed as "endangered" in 1984, and as "extinct in the wild" in 1991. There were suddenly far fewer Wyoming toads around 1975 and the toad extremely rare by 1980. To prevent extinction, a captive breeding program was started in 1989 at the Thorne Williams Unit. This program produced enough young toads in the first few years to send toads to seven different zoos. In 1998, the Saratoga National Fish Hatchery received toads to breed. Between 1995 and 2006, when the remaining captive toads were moved from the Thorne Williams Unit to the Red Buttes Environmental Biology Laboratory south of Laramie, nearly 46,000 offspring had been produced at the Thorne Williams Unit and released back into the wild. Before the sharp declines occurred, this toad was classified as a subspecies of the Canadian toad. 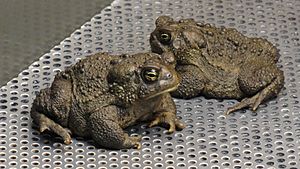 In nature, the female toad leaves her eggs in the shallow parts of ponds and lakes. The tadpoles swim in the warmest parts of the water.

Adult frogs look for food during the day and hide at night. Sometimes they go into burrows dug by rodents. Adult frogs eat mostly ants but they also eat beetles and other animals without backbones.

Scientists are not sure why the Wyoming toad started to die out in the 1970s. They think it might have been that people were using an insect-killing chemical called Baytex, that seagulls, pelicans and raccoons were eating the toads, or that irrigation for hay growing changed their living space.

All content from Kiddle encyclopedia articles (including the article images and facts) can be freely used under Attribution-ShareAlike license, unless stated otherwise. Cite this article:
Wyoming toad Facts for Kids. Kiddle Encyclopedia.