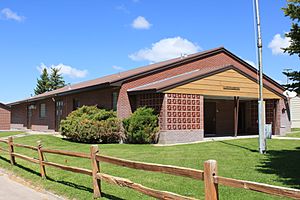 Saratoga National Fish Hatchery is part of the National Fish Hatchery System operated by the United States Fish and Wildlife Service. It is located northeast of Saratoga, Wyoming and, along with the Jackson National Fish Hatchery, is one of two National fish hatcheries operating in Wyoming. Saratoga NHF is primarily a broodstock hatchery; it maintains several healthy adults to produce sperm and eggs and distributes fertilized eggs to production hatcheries throughout the country to be hatched and grown to stockable sizes. It is also one of several organizations to establish a program for breeding Wyoming toads. 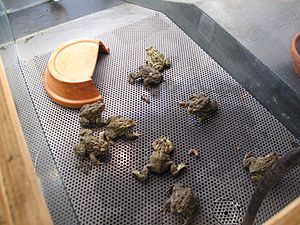 Tagging studies show that 75 percent of trout caught from Lake Huron were produced by the Saratoga NFH.

Saratoga NFH was one of several hatcheries that had made efforts towards the reintroduction of greenback cutthroat trout in various lakes and rivers by 2002.

In 1997, Saratoga NFH began breeding Wyoming toads as refugia and for future reintroduction efforts. It was the first in the NFHS to use its resources to raise endangered amphibians. It has since supplied hundreds of adult toads to Mortenson Lake National Wildlife Refuge and other locations for reintroduction, including more than 900 adult toads in a single release in June 2016.

All content from Kiddle encyclopedia articles (including the article images and facts) can be freely used under Attribution-ShareAlike license, unless stated otherwise. Cite this article:
Saratoga National Fish Hatchery Facts for Kids. Kiddle Encyclopedia.