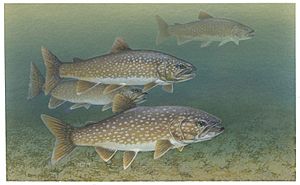 Lake trout (Salvelinus namaycush) is not a trout but a member of the freshwater char family. It lives mainly in lakes in northern North America. It is dark gray to olive green in color. It has light spots on their sides. Lake trout have a deeply forked tail. It is a species that has adapted well to the arctic and boreal regions of North America. It will eat nearly anything but can go long periods without food. It can eat other fish that are half it's own length.Lake trout can live from 25 to 40 years. Lake trout spawn eight to ten years in a row. The female produces 1,000 eggs for every kilogram she weighs. The largest Lake trout ever caught was in Canada and weighed 121 pounds. Other names for it include mackinaw, lake char (or charr), touladi, togue, and grey trout. In Lake Superior, it can also be variously known as siscowet, paperbelly and lean. The lake trout is prized both as a game fish and as a food fish.

All content from Kiddle encyclopedia articles (including the article images and facts) can be freely used under Attribution-ShareAlike license, unless stated otherwise. Cite this article:
Lake trout Facts for Kids. Kiddle Encyclopedia.