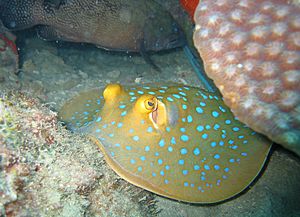 Most stingrays have one or more barbed stings on the tail, which is used only for self defending. The sting may reach about 35 cm, and its underside has two grooves with venom glands. The sting is covered with a thin layer of skin, the sheath, in which the venom is held. A few members of the suborder, such as the manta rays and the porcupine ray, do not have stings.

Stingrays are common in coastal tropical and subtropical marine waters throughout the world. There are species in warm temperate oceans, and some found in the ocean. Some live in fresh water. Most stingrays live at or near the bottom of the water, but some are pelagic.

Fatal stings are very rare. The death of Steve Irwin in 2006 was only the second recorded in Australian waters since 1945. The stinger pierced his heart.

Stingrays settle on the bottom while feeding, often leaving only their eyes and tail visible. Coral reefs are favorite feeding grounds and are usually shared with sharks during high tide.

The flattened bodies of stingrays allow them to hide themselves. Stingrays agitate the sand and hide beneath it. Because their eyes are on top of their bodies and their mouths on the undersides, stingrays cannot see their prey. They use smell and electro-receptors similar to those of sharks.

Stingrays feed mostly on molluscs, crustaceans, and occasionally on small fish. Some stingrays' mouths contain two powerful, shell-crushing plates, while other species only have sucking mouthparts.

Stingrays are ovoviviparous, bearing live young in 'litters' of five to thirteen. The female holds the embryos in the womb without a placenta. Instead, the embryos absorb nutrients from a yolk sac, and after the sac is depleted, the mother provides uterine 'milk'.

At the Sea Life London Aquarium 2 female stingrays have delivered 7 baby stingrays, although the mothers have not been near a male for 2 years. "Rays have been known to store sperm and not give birth until they decide the timing is right".

Like all fish, stingrays sometimes get little parasites (such as flukes or copepods) on their gills or body. A cleaner fish helps the stingrays by eating those parasites it can get at.

There are eight families in the stingray group. They are:

All content from Kiddle encyclopedia articles (including the article images and facts) can be freely used under Attribution-ShareAlike license, unless stated otherwise. Cite this article:
Stingray Facts for Kids. Kiddle Encyclopedia.