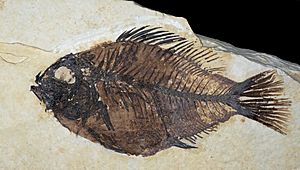 The Green River Formation is an Eocene rock formation on the eastern side of the Rocky Mountains. It records sediment from a group of intermountain lakes. Its fine fossils make this a lagerstätte, a place of exceptional preservation.

The various fossil beds of the Green River Formation span a 5 million year period, dating to between 53.5 and 48.5 million years ago (mya). During this period the climate moved from the moist early Eocene climate and the slightly drier mid-Eocene.

The sediments are deposited in very fine layers, in pairs: a dark layer from the growing season, and a light-hue inorganic layer in winter.

Each pair of layers is called a varve and represents one year. The sediments of the Green River Formation present a continuous record of six million years. The mean thickness of a varve here is 0.18 mm, with a minimum thickness of 0.014 mm and maximum of 9.8 mm.

The sedimentary layers were formed in a large area named after the present-day Green River, a tributary of the Colorado River. The formation is in three separate basins around the Uinta Mountains of northeastern Utah:

Conditions at the time

The formation has many evaporites – minerals formed by the evaporation of lakes. This suggests that high salinity was one of the causes of the superb fossilisation.

Another factor was the frequent ash falls from nearby volcanoes. Rapid burial also prevents normal decomposition.

Fossils preserved suggest that the region was a low, subtropical, freshwater basin when the sediments accumulated.

The Green River fossils show a transition between the moist early Eocene climate and the slightly drier mid-Eocene. The climate was moist and mild enough to support crocodiles, which do not tolerate frost, and the lakes were surrounded by sycamore forests. As the lake configurations shifted, each Green River location is distinct in character and time. The lake system formed over underlying river deltas and shifted in the flat landscape with slight tectonic movements

The Green River Formation contains the largest oil shale deposits in the world. The 213 billion tons of oil shale contain an estimated 2.38 × 10¹¹ m³ (1.5 trillion US barrels) of shale oil. This is a tribute to the high volume of organic material that was buried. The source of the organic material was probably cyanobacteria, which thrive in warm alkaline lake conditions.

The lagerstätten formed in anoxic conditions in the fine carbonate muds that formed in the lakebeds. Lack of oxygen slowed bacterial decomposition and kept scavengers away. Leaves of palms, ferns and sycamores, some showing the insect damage got during their growth, were covered with fine-grained sediment and preserved. Insects were preserved whole, even delicate wing membranes and spider spinnerets.

The fauna included fish, alligators, bats, turtles, dog-sized horses, insects, and many other species of plants and animals

All content from Kiddle encyclopedia articles (including the article images and facts) can be freely used under Attribution-ShareAlike license, unless stated otherwise. Cite this article:
Green River Formation Facts for Kids. Kiddle Encyclopedia.