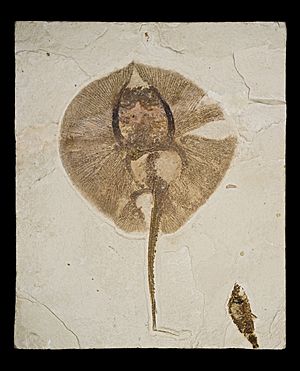 Heliobatis radians, an extinct stingray, had small teeth for crushing snails and other mollusks and barbed spines on the tail for defense. This specimen is about 35 centimetres (14 in) long, including the tail. 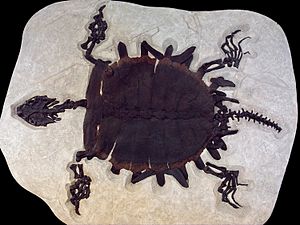 This 1.7-meter (5 foot 6 inch) Axestemys byssinus is one of the largest turtles known from Fossil Lake.

Fossil Butte National Monument preserves the best paleontological record of Cenozoic aquatic communities in North America and possibly the world, within the 50-million-year-old Green River Formation — the ancient lake bed. Fossils preserved include fish, alligators, bats, turtles, dog-sized horses, insects, and many other species of plants and animals — suggest that the region was a low, subtropical, freshwater basin when the sediments accumulated, over about a 2 million-year period.

During the Eocene this portion of Wyoming was a sub-tropical lake ecosystem. The ‘’’Green River Lake System’’’ contained three ancient lakes, Fossil Lake, Lake Gosiute, and Lake Uinta. These lakes covered parts of southwest Wyoming, northeast Utah and northwestern Colorado. Fossil Butte is a remnant of the deposits from Fossil Lake. Fossil Lake was 40 to 50 miles (64 to 80 km) long from north to south and 20 miles (32 km) wide. Over the two million years that it existed, the lake varied in length and width.

Fossil Buttes National Monument contains only 13 square miles (8,198 acres (33,180,000 m2)) of the 900-square-mile (595,200 acres (2.409×109 m2)) ancient lake. The ancient lake sediments that form the primary fossil digs is referred to as the Green River Formation. In addition to this fossil-bearing strata, a large potion of the Wasatch Formation, river and stream sediments, is within the national monument. The Wasatch Formation represents the shoreline ecosystem around the lake and contains fossil teeth and bone fragments of Eocene mammals. Among these are early primates and horses.

Coal mining for the railroad led to the settlement of the nearby town of Fossil, Wyoming. When the fossils were discovered, miners dug them up to sell to collectors. In particular, Lee Craig sold fossils from 1897 to 1937. Commercial fossil collecting is not allowed within the National Monument, but numerous quarries on private land nearby continue to produce extraordinary fossil specimens, both for museums and for private collectors.

The Fossil Butte National Monument Visitor Center features over 80 fossils and fossil casts on exhibit, including fish, a crocodile, turtle, bats, birds, insects and plants. A 13-minute video is shown about the fossils found at the site and what scientists have learned. Interactive exhibits let visitors create fossil rubbings to take home, and a computer program discusses fossils, geology and the current natural history of the monument.

During the summer, lab personnel prepare fossils in public. Summer activities also include ranger programs, hikes, paleontology and geology talks, and participation in fossil quarry collections for the park. 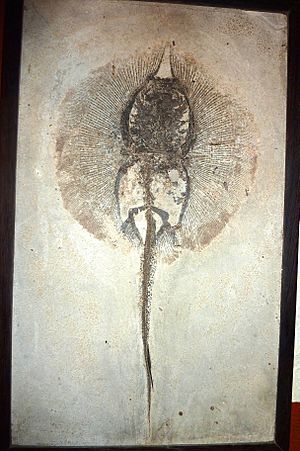 Stingray prepared by R. Lee Craig (asterotrygon maloneyi). In the collection of Fossil Shack. Prepared circa 1920.

A Junior Ranger program can be completed by children aged 5–12 (with exercises scaled to the child's age) in 3–4 hours. A highlight is hiking 3/4 mile up the butte to the dig, where interns from the Geological Society of America talk about their excavation and let children help them flake apart sedimentary deposits to discover fish fossils and coprolites.

All content from Kiddle encyclopedia articles (including the article images and facts) can be freely used under Attribution-ShareAlike license, unless stated otherwise. Cite this article:
Fossil Butte National Monument Facts for Kids. Kiddle Encyclopedia.