Agate Fossil Beds National Monument is a U.S. National Monument near Harrison, Nebraska. The main features of the monument are a valley of the Niobrara River and the fossils found on Carnegie Hill and University Hill.

The area largely consists of grass-covered plains. Plants on the site include prairie sandreed, blue grama, little bluestem and needle and thread grass, and the wildflowers lupin, spiderwort, western wallflower and sunflowers. 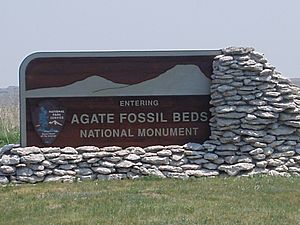 Entrance to the monument 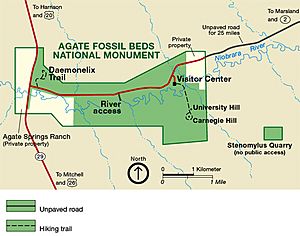 The site is best known for the large number of well-preserved Miocene fossils, many of which were found at dig sites on Carnegie and University Hills. Fossils from the Harrison Formation and Anderson Ranch Formation, which date to the Arikareean in the North American land mammal classification, about 20 to 16.3 million years ago, are among some of the best specimens of Miocene mammals. Species found at Agate include:

The national monument was authorized on June 5, 1965, but was not established until June 14, 1997. The Harold J. Cook Homestead (Bone Cabin Complex) was listed on the National Register of Historic Places in 1977. Agate Fossil Beds is maintained by the National Park Service.

All content from Kiddle encyclopedia articles (including the article images and facts) can be freely used under Attribution-ShareAlike license, unless stated otherwise. Cite this article:
Agate Fossil Beds National Monument Facts for Kids. Kiddle Encyclopedia.