Kids Encyclopedia Facts
This page is about the protected area. For the volcanic phenomenon, see Volcanic ash. For the 2019 South Korean film, see Ashfall (film).

The Ashfall Fossil Beds of Antelope County in northeastern Nebraska are rare fossil sites of the type called lagerstätten that, due to extraordinary local conditions, capture a moment in time ecological "snapshot" in a range of well-preserved fossilized organisms. Ash from a Yellowstone hotspot eruption 10-12 million years ago created these fossilized bone beds.

The Ashfall deposit preserves the fossilized remains of ancient animals that perished in a dense volcanic ash fall which occurred during the late Miocene, approximately 12 million years ago; the animals had come to a waterhole seeking relief. The fall of ash drifted downwind from the Bruneau-Jarbidge supervolcano eruption (in present-day Idaho), nearly 1,000 miles (1,600 km) west of the Ashfall site. A large number of very well preserved fossil Teleoceras (extinct hippo-like relatives of rhinos), small three-toed and one-toed horses, camels, and birds have been excavated. Many animals were preserved with their bones articulated; one rhino still bears her unborn fetus, while others retain the contents of their last meal.

The bones of the animals show features that indicate that the animals died of lung failure induced by inhaling volcanic ash. The smaller animals with smaller lung capacity were the first to die, and the larger animals were the last. Bite-marks on some bones show that local predators (the carnivorous bone-crunching dog Aelurodon) scavenged some of the carcasses, but no predator remains have yet surfaced. There are also abundant clues to the region's ecology, indicating a savanna of grassland interspersed with trees that luxuriated in a warmer, milder climate than today's.

The rapidly accumulating ash, windblown into deep drifts at low places like the waterhole site, remained moderately soft. The ash preserved the animals in three dimensions; not even the delicate bones of birds or the carapaces of turtles were crushed. Above the layer of ash, a stratum of more erosion-resistant sandstone has acted as "caprock" to preserve the strata beneath. 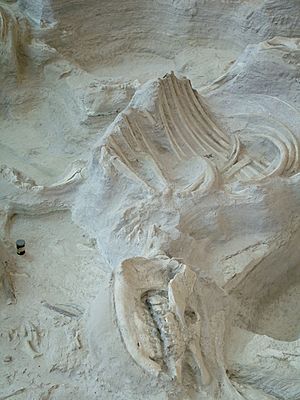 Fossil of a Teleoceras in volcanic ash. 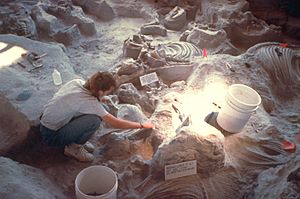 Paleontologists working on the site

The first hint of the site's richness was the skull of a juvenile rhinoceros noticed in 1971 eroding out of a gully at the edge of a cornfield. In 1971, University of Nebraska State Museum paleontologist Michael Voorhies was walking with his wife Jane through a series of gullies on Melvin Colson's farm in northeastern Nebraska and made this discovery. The Nebraska Game and Parks Foundation purchased the Ashfall site in 1986. Ashfall Fossil Beds State Historical Park opened in 1991. The site was declared a National Natural Landmark on May 9, 2006.

All content from Kiddle encyclopedia articles (including the article images and facts) can be freely used under Attribution-ShareAlike license, unless stated otherwise. Cite this article:
Ashfall Fossil Beds Facts for Kids. Kiddle Encyclopedia.