Camelids are a group of even-toed ungulate mammals. They form the family Camelidae. There are six living species of camelids. 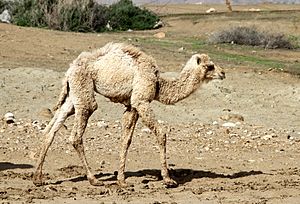 There also exists a camelid hybrid called a Cama. It is the child of a female Llama and a male Dromedary Camel. The Cama does not exist in nature, but is "made" by humans through artificial insemination (that means the sperm is artificially put into the female).

Camelids have been domesticated by humans for about 5000 years. They have been important for transport, but were also kept for wool, meat and milk. The llama and alpaca were very important for the South American cultures, like the Inca. The camels were used by people in north Africa and Asia, especially in deserts.

All content from Kiddle encyclopedia articles (including the article images and facts) can be freely used under Attribution-ShareAlike license, unless stated otherwise. Cite this article:
Camelid Facts for Kids. Kiddle Encyclopedia.