Kids Encyclopedia Facts
Not to be confused with Wasatch Fault, Wasatch Plateau, or Wasatch Range.

The Wasatch Formation (Tw) is an extensive highly fossiliferous geologic formation stretching across several basins in Idaho, Montana Wyoming, Utah and western Colorado. It preserves fossils dating back to the Early Eocene period. The formation defines the Wasatchian or Lostcabinian (55.8 to 50.3 Ma), a period of time used within the NALMA classification, but the formation ranges in age from the Clarkforkian (56.8 to 55.8 Ma) to Bridgerian (50.3 to 46.2 Ma).

Wasatch fauna consists of many groups of mammals, including numerous genera of primates, artiodactyls, perissodactyls, rodents, carnivora, insectivora, hyaenodonta and others. A number of birds, several reptiles and fish and invertebrates complete the diverse faunal assemblages. Fossil flora and ichnofossils also have been recovered from the formation.

The formation, first named as Wasatch Group in 1873 by Ferdinand Vandeveer Hayden, was deposited in alluvial, fluvial and lacustrine environments and comprises sandstones, siltstones, mudstones and shales with coal or lignite beds representing wet floodplain settings.

The Wasatch Formation is a tight gas reservoir formation in the Uinta and Piceance Basins of Utah and the coal seams of the formation are mined in Wyoming. At the Fossil Butte National Monument, the formation crops out underlying the Green River Formation. In the Silt Quadrangle of Garfield County, Colorado, the formation overlies the Williams Fork Formation.

The Wasatch Formation was first named as the Wasatch Group by Ferdinand Vandeveer Hayden in the 1873 edition of his original 1869 publication titled "Preliminary field report of the United States Geological Survey of Colorado and New Mexico: U.S. Geological and Geographical Survey of the Territories", based on sections in the Echo and Weber Canyons, of the Wasatch Mountains. In the language of the native Ute people, Wasatch means "mountain pass" or "low pass over high range." According to William Bright, the mountains were named for a Shoshoni leader who was named with the Shoshoni term wasattsi, meaning "blue heron". 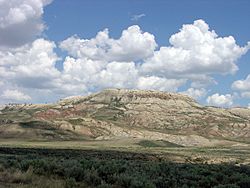 At the base of Fossil Butte are the bright red, purple, yellow and gray beds of the Wasatch Formation. Eroded portions of these horizontal beds slope gradually upward from the valley floor and steepen abruptly. Overlying them and extending to the top of the butte are the much steeper buff-to-white beds of the Green River Formation, which are about 300 feet (91 m) thick. The Wasatch Formation ranges from about 3,000 feet (910 m) in the western part of the Uinta Basin, thinning to 2,000 feet (610 m) in the east. In the Silt Quadrangle of Garfield County, Colorado, the formation overlies the Williams Fork Formation. The formation is exposed in the Desolation and Gray Canyons pertaining to the Colorado Plateau in northeastern Utah, and in Flaming Gorge National Recreation Area at the border of southwestern Wyoming and northeastern Utah. 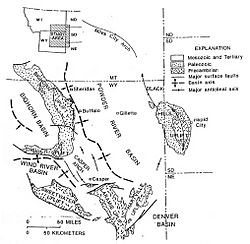 Map of the Powder and Wind River and Bighorn Basins 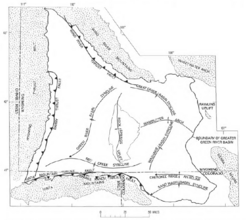 Map of the Green River Basin

Map of the Uinta and Piceance Basins

The Wasatch Formation is found across six states in the northwestern United States, from Montana and Idaho in the north across Utah and Wyoming to Colorado in the southwest. The formation is part of several geologic provinces; the eponymous Wasatch uplift, Uinta uplift, Green River, Piceance, Powder River, Uinta and Paradox Basins and the Colorado Plateau sedimentary province and Yellowstone province.

In Montana, the formation overlies the Fort Union Formation and is overlain by the White River Formation. There is a regional, angular unconformity between the Fort Union and Wasatch Formations in the northern portion of the Powder River Basin. 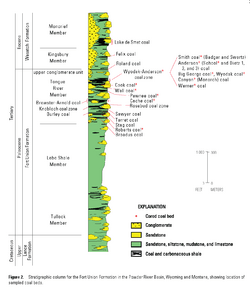 Generalized stratigraphy of the Wasatch Formation

Many local subdivisions of the formation exist, the following members have been named in the literature:

In the Fossil Basin at the Fossil Butte National Monument, Wyoming, the Wasatch Formation consists primarily of brightly variegated mudstones with subordinate interbedded siltstones, sandstones, and conglomerates and represents deposition on an intermontane alluvial plain. In Mesa County, Colorado, the formation comprises interbedded purple, lavender, red, and gray claystones and shales with local lenses of gray and brown sandstones, conglomeratic sandstones, and volcanic sandstones that are predominantly fluvial and lacustrine in origin. Along the western margin of the Powder River Basin, the Wasatch Formation contains two thick conglomeratic members (in descending order, the Moncrief Member and Kingsbury Conglomerate Member).

The Molina Member of the formation is a zone of distinctly sandier fluvial strata. The over- and underlying members of the Molina are the Atwell Gulch and Shire members, respectively. These members consist of infrequent lenses of fluvial-channel sandstones interbedded within thick units of variegated red, orange, purple and gray overbank and paleosol mudstones.

The Molina Member represents a sudden change in the tectonic and/or climatic regimes, that caused an influx of laterally-continuous, fine, coarse and locally conglomeratic sands into the basin. The type section of the Molina is located near the small town of Molina on the western edge of the basin and is about 90 metres (300 ft) thick. These sandy strata of the Molina Member form continuous, erosion-resistant benches that extend to the north of the type section for approximately 25 kilometres (16 mi). The benches are cut by canyons or "gulches", from which the Atwell Gulch and Shire Gulch members get their names. The Molina forms the principle target within the Wasatch Formation for natural gas exploration, although it is usually called the "G sandstone" in the subsurface.

Detrital zircons collected from the middle part of the formation in the Powder River Basin of Wyoming, where the Wasatch Formation reaches a thickness of more than 1,500 metres (4,900 ft) were gathered for U-Pb geochronological analysis. The detrital zircon age spectrum ranged from 1433-2957 Ma in age, and consisted of more than 95% Archean age grains, with an age peak of about 2900 Ma. The 2900 Ma age peak is consistent with the age of Archean rocks at the core of the Bighorn Mountains. The sparse Proterozoic grains were likely derived from the recycling of Paleozoic sandstone units. The analysis concluded that the Wasatch sandstone is a first cycle sediment, the Archean core of the Bighorn uplift was exposed and shedding sediment into the Powder River Basin during time of deposition of the Wasatch Formation and the Powder River Basin Wasatch detrital zircon age spectra are distinct from the coeval Willwood Formation in the Bighorn Basin west of the Bighorn Mountains. Cobbles and pebbles in the Wasatch are rich in feldspathic rock fragments, with individual samples containing as much as 40 percent, derived from erosion of the Precambrian core of the Bighorn Mountains. Part of the feldspar has been replaced by calcite cement. Glauconite is present in the Wasatch, although always in volumes of less than 1 percent of the grains. It most probably was derived from the nearby, friable, glauconite-bearing Mesozoic strata of the eastern Bighorn Mountains.

The presence of the Kingsbury Conglomerate at the base of the Wasatch Formation indicates that tectonic activity in the immediate vicinity of the Powder River Basin was intensifying. The conglomerate consists of Mesozoic and Paleozoic rock fragments. The lack of Precambrian fragments indicates that the metamorphic core of the Bighorn Mountains had not been dissected by this early deformation. Deformation in the upper part of the formation has been interpreted as the result of the last phase of uplift during the Laramide orogeny.

The Wasatch Formation is the defining formation for the Wasatchian, ranging from 55.8 to 50.3 Ma, within the NALMA classification. The Wasatchian followed the Clarkforkian stage (56.8-55.8 Ma) and is defined by the simultaneous first appearance of adapid and omomyid euprimates, hyaenodontid creodonts, perissodactyls and artiodactyls. The deposits of the formation were laid down during a period of globally high temperatures during the Paleocene-Eocene Thermal Maximum (PETM). Mean annual temperatures were around 25 °C (77 °F) and temperature variations were minimal during this time.

Among the following fossils have been found in the formation:

The mammal fauna of the formation is part of the fourth phase of herbivore expansion spanning about 115 Ma from the Aptian to Holocene, and correlated with the Wind River and Wilcox Formations of the United States and the Laguna del Hunco Formation of Argentina.

The Wasatch Formation is a tight gas reservoir rock in the Greater Natural Buttes Field in the Uinta Basin of Utah and Colorado. The formation is characterized by porosity ranging from 6 to 20 % and permeability of up to 1 mD. Based on 409 samples from the Wasatch Formation, average porosity is 8.75 percent and average permeability is 0.095 mD. The production rates after 2 years are 100–1,000 mscf/day for gas, 0.35–3.4 barrel per day for oil, and less than 1 barrel per day for water. The water:gas ratio ranges from 0.1 to 10 barrels per million standard cubic feet, indicating that free water is produced along with water dissolved in gas in the reservoir. Oil in the Bluebell-Altamont Field in the Uinta Basin and gas in the Piceance Creek Field in the Piceance Basin are produced from the Wasatch Formation.

As of May 2019, tight gas from the Wasatch Formation and underlying Mesaverde Group has been produced more than 1.76 trillion cubic feet (TCF) of gas from over 3,000 wells in the Uinta Basin, mostly from the Natural Buttes gas field in the eastern part of the basin. In the Piceance Basin, the Mesaverde Group and Wasatch Formation produced more than 7.7 TCF from over 12,000 wells, mostly from the central part of the basin.

The fluvial sandstones contain uranium roll front deposits. The formation is the main producer of uranium in the state. Ore zones contain uraninite and pyrite. Oxidized ores include uranophane, meta-autunite, and phosphuranylite.

All content from Kiddle encyclopedia articles (including the article images and facts) can be freely used under Attribution-ShareAlike license, unless stated otherwise. Cite this article:
Wasatch Formation Facts for Kids. Kiddle Encyclopedia.