The Uinta Mountains ( yoo-IN-tə) are an east-west trending chain of mountains in northeastern Utah extending slightly into southern Wyoming in the United States. As a subrange of the Rocky Mountains, they are unusual for being the highest range in the contiguous United States running east to west, and lie approximately 100 miles (160 km) east of Salt Lake City. The range has peaks ranging from 11,000 to 13,528 feet (3,353 to 4,123 m), with the highest point being Kings Peak, also the highest point in Utah. The Mirror Lake Highway crosses the western half of the Uintas on its way to Wyoming. 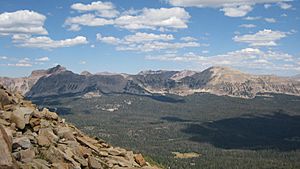 The Uinta Mountains are Laramide uplifted metasedimentary rocks deposited in an intracratonic basin in southwest Laurentia during the time of the breakup of the supercontinent Rodinia. The marine and fluvial metasedimentary rocks in the core of the Uinta Mountains are of Neoproterozoic age (between about 700 million and 800 million years old) and consist primarily of quartzite, slate, and shale. These rocks comprise the Uinta Mountain Group, and reach thicknesses of 13,000 to 24,000 feet (4.0 to 7.3 km). Most of the high peaks are outcrops of the Uinta Mountain Group. Many of the peaks are ringed with bands of cliffs, rising to form broad or flat tops. The mountains are bounded to the north and south by reverse faults that meet below the range, on the north by the North Flank fault and on the south by the Uinta Basin boundary fault.

The Uinta Mountain Group from oldest to youngest includes Uinta Mountain undivided quartz arenite, overlain by the Moosehorn Lake, Mount Watson, Hades Peak, and Red Shale formations. The flanks of the east-west trending Uinta Mountains contain a sequence of Paleozoic and Mesozoic strata ranging from the Cambrian Lodore Formation to the Cretaceous Mancos Shale, all of which have been tilted during the uplift of the mountain range.

The uplift of the range dates to the Laramide orogeny, about 70 to 50 million years ago, when compressive forces produced high-angle reverse faults on both north and south sides of the present mountain range. The east-west orientation of the Uintas is anomalous compared to most of the ranges of the Rocky Mountains; it may relate to changing stress patterns and rotation of the Colorado Plateau. The Green River used to flow into the Mississippi River to the Gulf of Mexico, but changed to the Colorado River by going through the Uintas in ways not fully understood.

The high Uintas were extensively glaciated during the last ice age, and most of the large stream valleys on both the north and south sides of the range held long valley glaciers. However, despite reaching to over 13,500 feet (4,110 m) in elevation, the climate today is sufficiently dry that no glaciers survived even before the rapid current glacial retreat began in the middle nineteenth century. The Uintas are the most poleward mountain range in the world to reach over 13,000 feet (4,000 m) without modern glaciers, and are in fact the highest mountain range in the contiguous United States with no modern glaciers. Permafrost occurs at elevations above 10,000 feet (3,000 m) and at times forms large rock glaciers.

In between the summits and ridgelines are wide, level basins, with some 500 small lakes. One of the most popular lakes is Mirror Lake because of its good fishing, scenic views, and easy road access. 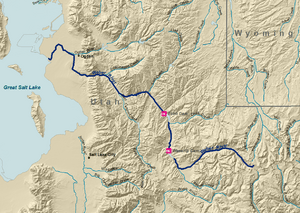 Large portions of the mountain range receive over 40 inches (100 cm) of precipitation annually. The high Uintas are snowcapped most of the year except for late July through early September. The Uinta Mountains have more than 400 miles (640 km) of streams and 1,000 lakes and ponds. 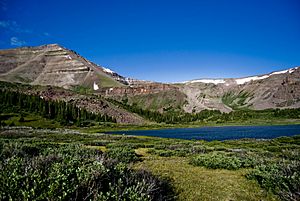 The Uinta Mountains are part of the Wasatch and Uinta montane forests ecoregion. Nearly the entire range lies within Uinta-Wasatch-Cache National Forest (on the north and west) and Ashley National Forest (on the south and east). The highest peaks of the range are protected as part of the High Uintas Wilderness. The forests contain many species of trees, including lodgepole pine, subalpine fir, Engelmann spruce, Douglas-fir, and quaking aspen. There are also many species of grasses, shrubs, and forbs growing in the Uinta Mountains. Fauna are typical of central Rocky Mountains. Large grazing and browsing animals include Rocky Mountain Elk, Mule Deer, Moose, Pronghorn Antelope, mountain goats, and Rocky Mountain Bighorn Sheep. Mammalian predators include Black Bear, Mountain Lion, Coyotes, Red Fox, Badger, Wolverine, Marten, and Long-tailed Weasel. A Gray Wolf pack has been observed at the eastern end of the range, in Moffat County, Colorado. Raptors include Bald And Golden Eagles, Turkey Vulture, various hawks and harriers, and owls including Great Horned, Great Grey and Barn Owls. Other notable large birds include Sage Grouse and White-tailed Ptarmigan.

The Uintas is home to Camp Steiner, the highest Boy Scout camp in the United States at 10,400 feet (3,200 m). The camp is near mile marker 33 of the Mirror Lake Highway.

The Uinta Highline Trail traverses the entire range and is a popular backpacking trail.

Dinosaur National Monument is located on the southeast flank of the Uinta Mountains on the border between Colorado and Utah.

All content from Kiddle encyclopedia articles (including the article images and facts) can be freely used under Attribution-ShareAlike license, unless stated otherwise. Cite this article:
Uinta Mountains Facts for Kids. Kiddle Encyclopedia.