Picea engelmannii, with common names Engelmann spruce, white spruce, mountain spruce, or silver spruce, is a species of spruce native to western North America, from central British Columbia and southwest Alberta, southwest to northern California and southeast to Arizona and New Mexico; there are also two isolated populations in northern Mexico. It is mostly a high altitude mountain tree, growing at 900 metres (3,000 ft) – 3,650 metres (11,980 ft) altitude, rarely lower in the northwest of the range; in many areas it reaches the alpine tree line. 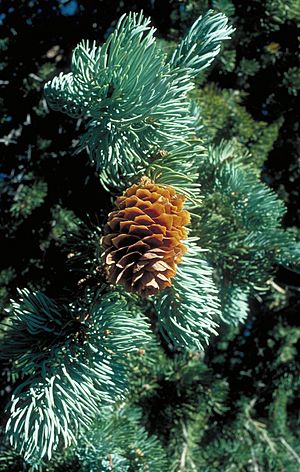 Picea engelmannii is a medium-sized to large evergreen tree growing to 25 metres (82 ft) – 40 metres (130 ft) tall, exceptionally to 65 metres (213 ft) tall, and with a trunk diameter of up to 1.5 metres (4.9 ft). The bark is thin and scaly, flaking off in small circular plates 5–10 cm across. The crown is narrow conic in young trees, becoming cylindric in older trees. The shoots are buff-brown to orange-brown, usually densely pubescent, and with prominent pulvini. The leaves are needle-like, 15–30 mm long, rhombic in cross-section, glaucous blue-green above with several thin lines of stomata, and blue-white below with two broad bands of stomata.

The cones are pendulous, slender cylindrical, 4–8 cm long and 1.5 cm broad when closed, opening to 3 cm broad. They have thin, flexible scales 15–20 mm long, with a wavy margin. They are reddish to dark purple, maturing pale brown 4–7 months after pollination. The seeds are black, 2–3 mm long, with a slender, 5–8 mm long pale brown wing.

Engelmann spruce extends northward at higher elevations in the Cascade, Monashee, Selkirk, and possibly the Rocky Mountains, as well as the highlands surrounding the Interior Plateau.

Both water uptake and water stored in roots appear to be critical for the survival of subalpine Engelmann spruce saplings that are exposed above the snowpack in later winter-early spring. Transpiration is greatly reduced in small saplings while engulfed in snowpack. For exposed trees, the availability of soil water may be critical in late winter, when transpirational demands increase. Increased rates of transpiration in response to loss of snowpack, coupled with low sapwood water reserves and an extended period of soil frost in windswept areas, may prevent Engelmann spruce from regenerating in open areas both above and below the tree line. Cuticular damage by windblown ice is probably more important at the tree line, but damage caused by desiccation is likely to be more important at lower elevations.

Two geographical subspecies (treated as varieties by some authors, and as distinct species by others) occur:

Engelmann spruce is of economic importance for its wood, harvested for paper-making and general construction. Wood from slow-grown trees at high altitude has a specialised use in making musical instruments such as acoustic guitars, harps, violins, and pianos. It is also used to a small extent as a Christmas tree.

All content from Kiddle encyclopedia articles (including the article images and facts) can be freely used under Attribution-ShareAlike license, unless stated otherwise. Cite this article:
Picea engelmannii Facts for Kids. Kiddle Encyclopedia.