Picea sitchensis, the Sitka spruce, is a large, coniferous, evergreen tree growing to almost 100 m (330 ft) tall, with a trunk diameter at breast height that can exceed 5 m (16 ft). It is by far the largest species of spruce and the fifth-largest conifer in the world (behind giant sequoia, coast redwood, kauri, and western redcedar); and the third-tallest conifer species (after coast redwood and coast Douglas fir). The Sitka spruce is one of the few species documented to exceed 300 ft (90 m) in height. Its name is derived from the community of Sitka in southeast Alaska, where it is prevalent. Its range hugs the western coast of Canada and the US, continuing south into northernmost California. 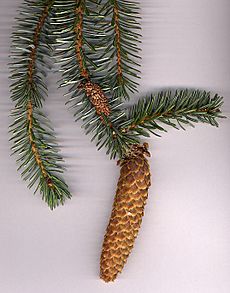 The bark is thin and scaly, flaking off in small, circular plates 5–20 cm (2.0–7.9 in) across. The crown is broad conic in young trees, becoming cylindric in older trees; old trees may not have branches lower than 30–40 m (98–131 ft). The shoots are very pale buff-brown, almost white, and glabrous (hairless), but with prominent pulvini. The leaves are stiff, sharp, and needle-like, 15–25 mm long, flattened in cross-section, dark glaucous blue-green above with two or three thin lines of stomata, and blue-white below with two dense bands of stomata.

More than a century of logging has left only a remnant of the spruce forest. The largest trees were cut long before careful measurements could be made. Trees over 90 m (300 ft) tall may still be seen in Pacific Rim National Park and Carmanah Walbran Provincial Park on Vancouver Island, British Columbia (the Carmanah Giant, at 96 m (315 ft) tall, is the tallest tree in Canada), and in Olympic National Park, Washington and Prairie Creek Redwoods State Park, California (United States); two at the last site are just over 96 m tall. The Queets Spruce is the largest in the world with a trunk volume of 346 m3 (12,200 cu ft), a height of 74.6 m (245 ft), and a 4.4 m (14 ft) dbh. It is located near the Queets River in Olympic National Park, about 26 km (16 mi) from the Pacific Ocean. Another specimen, from Klootchy Creek Park, Oregon, was previously recorded to be the largest with a circumference of 15 metres (49 ft) and height of 66 metres (217 ft).

Sitka spruce is a long-lived tree, with individuals over 700 years old known. Because it grows rapidly under favorable conditions, large size may not indicate exceptional age. The Queets Spruce has been estimated to be only 350 to 450 years old, but adds more than a cubic meter of wood each year.

Living in an extremely wet climate, the Sitka spruce has a shallow root system with long lateral roots and few branchings.

Despite the prevalence of Sitka spruce in cool, wet climates, its thin bark and shallow root system make it susceptible to fire damage.

DNA analysis has shown that only P. breweriana has a more basal position than Sitka spruce to the rest of the spruce. The other 33 species of spruce are more derived, which suggests that Picea originated in North America.

Sitka spruce is native to the west coast of North America, with its northwestern limit on Kenai Peninsula, Alaska, and its southeastern limit near Fort Bragg in northern California. It is closely associated with the temperate rain forests and is found within a few kilometers of the coast in the southern portion of its range. North of Oregon, its range extends inland along river floodplains, but nowhere does its range extend more than 80 km (50 mi) from the Pacific Ocean and its inlets.

Sitka spruce has been introduced to Europe as a lumber tree, and was first planted there in the 19th century. Sitka spruce plantations have become a dominant forest type in Great Britain and Ireland, making up 25% of forest cover in the former and 52% in the latter. Sitka spruce woodland is also present in France and Denmark, and the plant was introduced to Iceland and Norway in the early 20th century.

Sitka spruce is of major importance in forestry for timber and paper production. Outside its native range, it is particularly valued for its fast growth on poor soils and exposed sites where few other trees can prosper; in ideal conditions, young trees may grow 1.5 m (4.9 ft) per year. It is naturalized in some parts of Ireland and Great Britain, where it was introduced in 1831 by David Douglas, and New Zealand, though not so extensively as to be considered invasive. Sitka spruce is also planted extensively in Denmark, Norway, and Iceland. In Norway, Sitka spruce was introduced in the early 1900s. An estimated 50,000 hectares (120,000 acres) have been planted in Norway, mainly along the coast from Vest-Agder in the south to Troms in the north. It is more tolerant to wind and saline ocean air, and grows faster than the native Norway spruce. But in Norway, the Sitka spruce is now considered an invasive species, and effort to get rid of it is being made.

Sitka spruce is used widely in piano, harp, violin, and guitar manufacture, as its high strength-to-weight ratio and regular, knot-free rings make it an excellent conductor of sound. For these reasons, the wood is also an important material for sailboat spars, and aircraft wing spars (including flying models). The Wright brothers' Flyer was built using Sitka spruce, as were many aircraft before World War II; during that war, aircraft such as the British Mosquito used it as a substitute for strategically important aluminium.

Newly grown tips of Sitka spruce branches are used to flavor spruce beer and are boiled to make syrup. 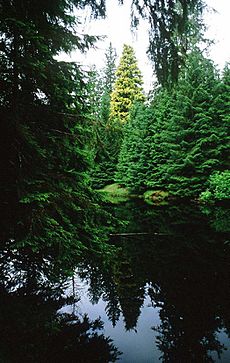 A unique specimen with golden foliage that used to grow on Haida Gwaii, known as Kiidk'yaas or "The Golden Spruce", is sacred to the Haida First Nations people. It was illegally felled in 1997 by Grant Hadwin, although saplings grown from cuttings can now be found near its original site.

The stilbene glucosides astringin, isorhapontin, and piceid can be found in the bark of the Sitka spruce. 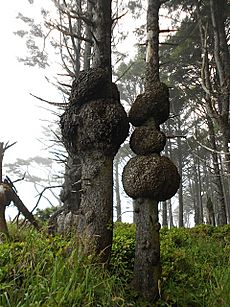 In the Olympic National Forest in Washington, Sitka spruce trees near the ocean sometimes develop burls.

According to a guidebook entitled Olympic Peninsula, "Damage to the tip or the bud of a Sitka spruce causes the growth cells to divide more rapidly than normal to form this swelling or burl. Even though the burls may look menacing, they do not affect the overall tree growth."

All content from Kiddle encyclopedia articles (including the article images and facts) can be freely used under Attribution-ShareAlike license, unless stated otherwise. Cite this article:
Sitka spruce Facts for Kids. Kiddle Encyclopedia.