Kids Encyclopedia Facts
This page is about the mountain in Utah. For other peaks, see Kings Peak.

Kings Peak is the highest peak in the U.S. state of Utah, with an elevation of 13,534 feet (4,125 m) NAVD 88. It lies just south of the spine of the central Uinta Mountains, in the Ashley National Forest in northeastern Utah, in north-central Duchesne County. It lies within the boundaries of the High Uintas Wilderness. The peak is approximately 79 miles (127 km) due east of central Salt Lake City, and 45 miles (72 km) due north of the town of Duchesne.

There are three popular routes to the summit; a scramble up the east slope, a hike up the northern ridge, and a long but relatively easy hike up the southern slope. The peak was named for Clarence King, a surveyor in the area and the first director of the United States Geological Survey. Kings Peak is generally regarded as the hardest state highpoint which can be climbed without specialist rock climbing skills and/or guiding. The easiest route requires a 29 mile round trip hike. 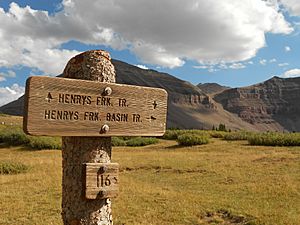 Henry's Fork Basin to the north is criss-crossed with hiking trails. Kings Peak is the peak in the distance, with Anderson pass to the right and West Gunsight behind the sign

All content from Kiddle encyclopedia articles (including the article images and facts) can be freely used under Attribution-ShareAlike license, unless stated otherwise. Cite this article:
Kings Peak (Utah) Facts for Kids. Kiddle Encyclopedia.