Rectangular joints in siltstone (top) and black shale (below) in the Utica Shale (Ordovician) near Fort Plain, New York. 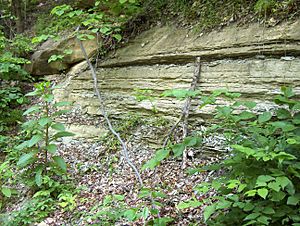 A siltstone is a mudrock. For a rock to be a siltstone, it must be over fifty percent silt-sized material.

Silt is any particle smaller than sand, 1/16th of a millimeter (~0.06 mm), and larger than clay, 1/256th (~0.004 mm) of millimeter. Silt is the product of physical weathering, such as freezing and thawing. Physical weathering does not involve any chemical changes in the rock, just its physical breaking apart.

One of the highest proportions of silt found on Earth is in the Himalayas, which get rainfall of up to five to ten meters (16 to 33 feet) a year. Quartz and feldspar are the biggest contributors to silt. Silt tends to be non-cohesive, non-plastic, but can liquefy easily.

All content from Kiddle encyclopedia articles (including the article images and facts) can be freely used under Attribution-ShareAlike license, unless stated otherwise. Cite this article:
Siltstone Facts for Kids. Kiddle Encyclopedia.