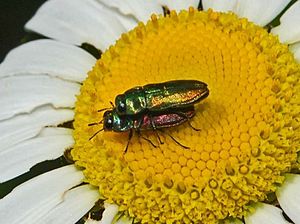 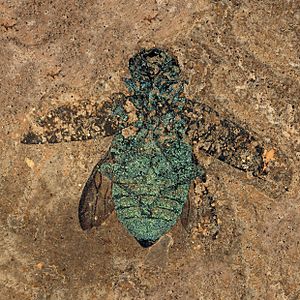 Buprestida is a family of beetles. In English, they are known as jewel beetles or metallic wood-boring beetles, because of the coloring of their carapace. The family is among the largest of the beetles, with some 15,000 recent species in 450 genera. In addition, almost 100 fossil species have been described.

Shape is generally cylindrical or elongate to ovoid, with lengths ranging from 3 to 80 mm (0.12 to 3.15 in), although most species are under 20 mm (0.79 in). Catoxantha, Chrysaspis, Euchroma and Megaloxantha contain the largest species. A variety of bright colors are known, often in complicated patterns. The iridescence common to these beetles is not due to pigments in the exoskeleton, but instead is caused by structural coloration, in which microscopic texture in their cuticle selectively reflects specific frequencies of light in particular directions. This is the same effect that makes a compact disc reflect multiple colors.

The larvae bore through roots, logs, stems, and leaves of various types of plants, ranging from trees to grasses. The wood boring types generally favor dying or dead branches on otherwise-healthy trees, while a few types attack green wood; some of these are serious pests capable of killing trees and causing major economic damage, such as the invasive emerald ash borer. Some species are attracted to recently burned forests to lay their eggs. They can sense pine wood smoke from up to 50 miles away, and can see infrared light, helping them to zero in as they get closer to a forest fire.

Ten species of flatheaded borers of the family Buprestidae feed on spruce and fir, but hemlock is their preferred food source (Rose and Lindquist 1985). As with roundheaded borers, most feeding occurs in dying or dead trees, or close to injuries on living trees. Damage becomes abundant only where a continuing supply of breeding material is available. The life history of these borers is similar to that of the roundheaded borers, but some exceedingly long life cycles have been reported under adverse conditions. Full-grown larvae, up to 25 mm long, are characteristically flattened, the anterior part of the body being much broader than the rest. The bronzed adults are usually seen only where suitable material occurs in sunny locations.

All content from Kiddle encyclopedia articles (including the article images and facts) can be freely used under Attribution-ShareAlike license, unless stated otherwise. Cite this article:
Buprestidae Facts for Kids. Kiddle Encyclopedia.