A katana is a Japanese long sword used by samurai warriors. It is the most important sword of the three swords worn by samurai: katana, wakizashi, and tanto. The katana was popular from 1400 A.D. until 1876, when the samurai were abolished as a social class.

In Japanese, "katana" means a long sword and it represents a blade, which is a little curved, with a single edge and a very sharp point.

There are several types of katanas: 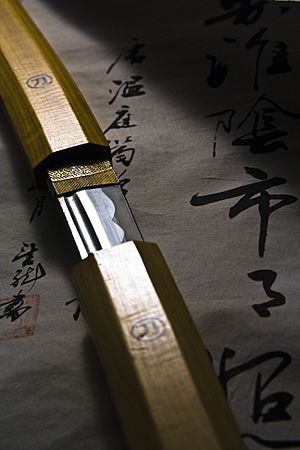 A traditional katana is made of a type of high carbon steel called tamahagane, which is made by smelting a type of Japanese iron ore, called iron sand, in a large furnace called a tatara.

This steel is sent to a smith who breaks it down to small pieces and layers the steel according to carbon content, they smelt this in their forge and repeatedly fold the steel in order to homogenise it. The most important part of the forging is the tempering, when the sword is quench-hardened. In ancient times it was said that the soul of the sword was put into the katana at this point. The sword is sometimes given a rough polish by the smith and then sent to a professional polisher for polishing (usually to a mirror finish). After polishing, the sword to be fitted.

Today katanas are mainly made of carbon steel of different quality. But there are some swords made of zinc and aluminum alloys, which are able to resist some external forces and are only used for decoration or non-tameshigiri practice. To determine the quality of a katana it is enough to check its resistance (how much it bends when it is hit), elasticity (the ability of katana to return to its original shape), and the endurance of the blade after striking (how long it lasts). 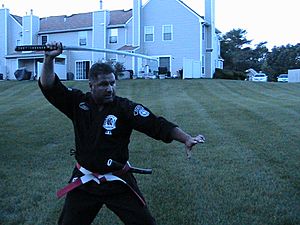 As a rule, katana was worn under the belt on the left side of a right-handed man. The sword was in its sheath or scabbard (the cover), with its blade facing up. That way the sword could be drawn and cut the opponent in one movement. Alternatively, the scabbard might be held freely in the left hand: in action the sword would be drawn and the scabbard thrown down. This allows for free movement in battle.

To pull the katana a few inches out of its scabbard was an aggressive move signalling willingness to fight. 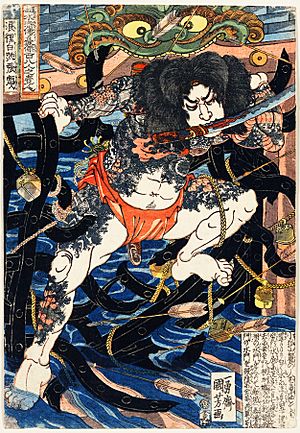 Katana was very important in Japanese society. This sword was thought to be the "soul" of its master. Only a samurai was allowed to have a katana. A simple man with a katana sword could be killed at once.

There was a tradition of wearing, taking care and taking the katana out of its scabbard. Samurai kept their katana on a special stand for swords, called katana-kake. This stand was used for both katana and wakizashi. The blade had to have its point up, just as when wearing the sword; the handle (called the tang) had to be turned to the left. This made katana available for handling any time it was needed.

The art of handling a katana was developed in martial arts like kenjutsu and iaijutsu. Today, this art is practiced in iaido and kendo martial arts. The last one is the art of dueling with bamboo or wooden sword. Old schools of handling katana swords still exist. The most famous are: Kashima Shin-ryu, Kashima Shinto-ryu, Tenshin Shoden Katori Shinto-ryu.

The most appreciated technique of handling a katana is a school called Nitto Ryu. This school taught how to use both a katana and a wakizashi during a fight. The most famous samurai who improved this art was Miyamoto Musashi.

All content from Kiddle encyclopedia articles (including the article images and facts) can be freely used under Attribution-ShareAlike license, unless stated otherwise. Cite this article:
Katana Facts for Kids. Kiddle Encyclopedia.