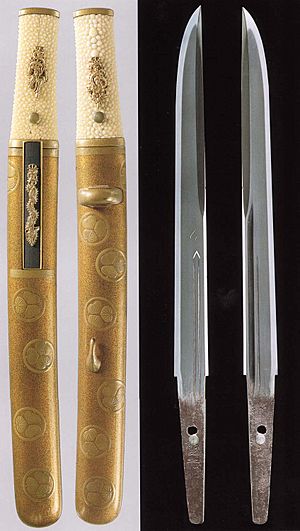 The Tanto is a Japanese short sword or dagger.

The tanto's traditional overall length was 11.93 in (1 shaku, about 30cm). The blade's length was about 5in to 12in (12 1/2cm to 30cm). Blades that were bigger (13" to 14" inches) were called ko-wakizashi, or "small short sword." The tantos which varied from the traditional size were called O-tanto or Sunobi tanto.

The tanto was a weapon with a single-edged blade and a curved shape. It was designed for soft targets and was thought to be a hidden weapon of the samurai. It was extremely effective in close fighting.

The tanto appeared during the Heian Period (795-1192 A.D.) and developed as a weapon during the Kamakura Period (1192-1333 A.D.). At that time the tanto was not just a weapon but also a work of art. It was richly decorated using the most spread styles: hira-tsukuri and uchi-sori. Later, in the Nambokucho period (1336-1392 A.D), tantos become longer than 15.75 inches (37cm). Blades become thinner and broader and thus even more dangerous. Different styles developed and the shape changed. During the Muromachi Period (1336–1573 A.D.) the tanto becomes once more narrow-bladed.

By this time the quality of the blade was better. It was the time when professional smiths appeared and there were several styles of tanto making. The best known smiths were: Sukesada and Norimitsu (Bizen-den); Kanemoto and Kanesada (Mino-den); Muramasa and Masashige (Ise). The beginning of Edo period (1603-1867 A.D.) was a period of relative peace after Japanese unification and, although not so many were made, they were of good quality. The heat treated blade's edge (hamon) becomes more waved and so more beautiful.

A great number of tantos were made in the last 700 to 800 years. Some of them were for civil use. Others were made especially for samurai. One of the classifications is based on the hand guard type: 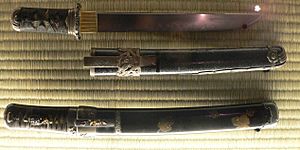 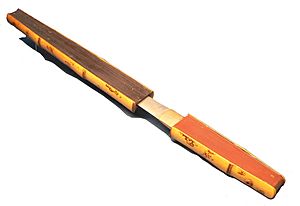 The most popular of the three tantos were aikuchi and hamadashi. This was because of the fact that these two types had a small guard and they were easier to hide and carry. The tanto was not widely used on the battlefield, so the guard was mostly unnecessary.

Other styles of tanto differed by the shape of the blade. The best known are:

When the tanto was used on the battlefield it was supposed to go through the armor of the opponent when he was close. The best tantos for this were those with a long, narrow blade and with a thick spine. The blow was applied with the point directed under or through the armor. The tanto was usually carried in a wide cloth belt (obi) with the edge up and the handle turned to the right. In the samurai house the tanto was often placed with the wakizashi (short sword). Samurai women were taught to use the tanto in case they needed to defend themselves or, if violated, to take their own life.

All content from Kiddle encyclopedia articles (including the article images and facts) can be freely used under Attribution-ShareAlike license, unless stated otherwise. Cite this article:
Tanto Facts for Kids. Kiddle Encyclopedia.