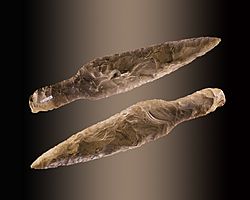 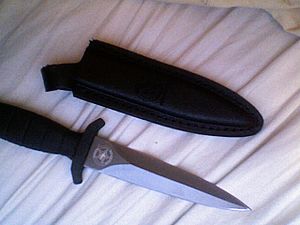 A dagger is a knife which is used to stab people. It has a double-edged blade, so it cannot be used for normal cutting like a knife.

Daggers are small, so they can often be hidden under the attacker's clothing and then suddenly produced.

They were also used in the Middle Ages for the infantry armies to defend or attack their opponents.

Some people like Julius Caesar were assassinated with a dagger.

All content from Kiddle encyclopedia articles (including the article images and facts) can be freely used under Attribution-ShareAlike license, unless stated otherwise. Cite this article:
Dagger Facts for Kids. Kiddle Encyclopedia.